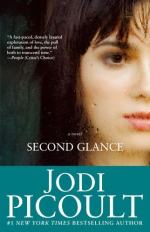 Jodi Picoult
This Study Guide consists of approximately 41 pages of chapter summaries, quotes, character analysis, themes, and more - everything you need to sharpen your knowledge of Second Glance.

This detailed literature summary also contains Topics for Discussion and a Free Quiz on Second Glance by Jodi Picoult.

Second Glance is a novel by bestselling novelist, Jodi Picoult. In this novel, a development company's decision to build a strip mall on an old and abandoned property in Comtosook, Vermont not only creates a protest among the local Abenaki Indians, but brings to light a ghost who has been haunting the property for seventy years. Ross Wakeman arrives in town after quitting his job only to find himself pulled into searching for the ghost haunting the townspeople of Comtosook. When Ross meets a beautiful and confused woman, he finds himself quickly falling in love despite his decade-long devotion to his dead fiancée. However, when Ross realizes this woman is the ghost who has turned Comtosook on its head, he becomes determined to identify her killer and then join her in the afterlife. Second Glance is a ghost story that takes on the question of whether or not love dies when a soulmate is taken away.

Ross Wakeman has been working with ghost hunters for more than year, trying to find proof of ghosts. Ross lost the love of his life ten years before in a tragic car accident and has spent the last decade attempting to join her. Unfortunately, it seems Ross cannot die. Every time Ross tries, he miraculously survives. During his latest attempt at finding a ghost, Ross realizes his boss, a famous television ghost hunter, is a liar who is willing to do almost anything for ratings. This causes Ross to become disillusioned and so he quits his job. He goes to stay in Comtosook, Vermont with his sister, Shelby, and her son, Ethan.

Ethan has XP, an illness that makes him unable to tolerate UV light. Ethan and his mother sleep all day so they can play outside in the dark. Shelby has been raising Ethan alone since his diagnoses scared his father away. Ethan adores his uncle and is thrilled when the construction on the old Pike property causes a ghost to manifest itself, giving Ross a job. Ethan assists Ross as he sets up video cameras and attempts to catch proof of the ghost living on the Pike property. Ross expects to find an Indian haunting the area because the Abenaki Indians are protesting the construction of the new strip mall. They claim the Pike property houses an Indian burial sight. However, all Ross finds is a beautiful young woman who appears afraid of her husband.

Ross becomes obsessed with this young woman, Lia, when he again runs into her at the diner in town. Ross returns to the Pike property over and over in hopes of seeing Lia again where he first saw her. One night, Ross runs into Lia on the Pike property again but she is very frightened of something Ross does not understand. Ross chases Lia as she attempts to leave. Ross trips over a headstone during the chase. When Ross sees the name on the headstone, both he and Lia are in for a huge surprise. The name is Cecelia Beaumont Pike. It is Lia's grave. Lia is a ghost who disappears as Ross watches.

Ross enlists the help of a local detective to help him find out how Lia died. The detective, Eli Rochert, unearths the file on Lia's death, discovering that Lia was hung and the suspect at the time was an Abenaki Indian named Gray Wolf. As Eli becomes embroiled in the investigation, he meets Shelby Wakeman and falls head over heels in love. This keeps Eli nearly as obsessed with the case as Ross.

The investigation eventually leads Eli and Ross to question not only Lia's murder, but the death of her infant born that same night. Lia's widow, Spencer Pike, claims that the baby was stillborn and that he buried it the day it was born in order to spare Lia's feelings. However, when Eli exhumes both Lia's and the baby's bodies, he discovers that Spencer buried a beef roast and not a stillborn infant. This leads Eli and Ross to Ruby Weber, a French-Canadian woman who was once a house girl in the Pike home. Ruby is now in her late eighties, living with her granddaughter and great-granddaughter.

Ross visits Ruby Weber and asks her about the night Lia died. Ruby confesses to seing Lia's body hanging in the ice house the night she died. Ruby also tells Ross that the infant was still alive, crying in her coffin in the ice house. However, Ruby claims the baby died soon after she stole her and ran away. Ross knows this is not true, however, because Ruby's granddaughter, Meredith, looks exactly like Lia. Ross tells Meredith the truth about her mother and convinces her to return to Comtosook with him.

Meredith meets her great-great grandfather and her grandfather after a DNA test confirms their family connection. Soon after, Meredith decides to return to Maryland and leave Lia in the past even as Eli and Ross come to the conclusion that Lia committed suicide to punish her husband for the baby's death. However, when Ethan and Meredith's daughter, Lucy, become trapped in a rock quarry as the computer begins detonating explosives to excavate the rock, Meredith and Ross are forced to face danger in an attempt to rescue them. Ross manages to get the kids out safely. However, Meredith becomes trapped under a slab of rock. While trying to help her, Ross spots a stick of dynamite too close to her. Ross takes the dynamite and attempts to move it before it explodes. The explosion comes too quickly, causing Ross to be thrown against some rocks, killing him.

Ross dreams of the day his fiancée died. Ross relives the moment when he chose to leave his fiancée by the side of the road to help the other driver. As Ross lays the other driver out of harm's way, he realizes it is Meredith. Ross saved Meredith's life ten years ago, enabling her to give birth to Lucy and continue her research in genetics. Ross suddenly wakes up as he is being wheeled into the morgue. Ross tells Meredith about the accident. Together they realize they were meant to be, just like Shelby and Eli have discovered their own connection to one another.

More summaries and resources for teaching or studying Second Glance.