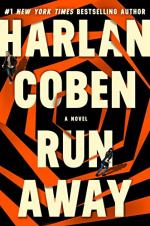 Get Run Away from Amazon.com
View the Study Pack
Study Guide
Order our Run Away Study Guide

Harlan Coben
This Study Guide consists of approximately 55 pages of chapter summaries, quotes, character analysis, themes, and more - everything you need to sharpen your knowledge of Run Away.

Run Away Summary & Study Guide includes comprehensive information and analysis to help you understand the book. This study guide contains the following sections:

This detailed literature summary also contains Quotes and a Free Quiz on Run Away by Harlan Coben.

Simon Greene's oldest daughter, Paige, seemed to be a typical, happy teenager until part way through her freshman year at college. It was then that she spiraled out of control into a world of drugs and violence, supported by a man named Aaron Corval. Simon and his wife, Ingrid, assume that Paige and Aaron are romantically involved and that Aaron is enabling Paige to maintain his control over her. Ingrid has insisted that they stop trying to fix Paige's life, saying that nothing will change until Paige chooses to make her life different. But one afternoon, Simon learns that Paige is going to be in Central Park's Strawberry Field, playing her music for tips. Simon watches the skinny young drug addict as she plays, hardly able to compare her to the beautiful young woman he had raised. When Paige prepares to leave, Simon confronts her. Paige seems to waver until Aaron shows up. Simon, frantic to keep Paige with him, shoves Aaron and is arrested. A few months later, Aaron is found murdered. Police look at Simon and at Paige. Paige seems to have disappeared completely.

Simon decides to go to the house where Aaron and Paige had lived in the hopes of finding Paige. His wife Ingrid insists on going along. They meet the man who owns the apartment building, Cornelius, who is willing to stand up for what is right even when it is dangerous. Simon and Ingrid follow the trail. A drug dealer shoots Ingrid. He might have killed her except that Cornelius had followed Simon. Cornelius shoots the drug dealer, who insists he shot in self-defense. While Ingrid is in the hospital, Simon continues to investigate, hoping to find Paige.

Meanwhile, Henry Thorpe's father hires a private investigator named Elena Ramirez. Henry is missing. His father is convinced something is wrong. As Simon and Elena begin to work together, they discover that several young men were adopted through the same adoption agency and that the adoptions were shrouded in mystery. Elena crosses paths with Dee Dee Lahoy and Ash Davis. They have murdered several young men, including Henry, because each has a connection to a cult known as The Truth. The leader is near death. Dee Dee is a member of this cult. Ash has been hired to kill several young men who present a threat to the two men who are soon to take over leadership, though the young men were separated from the cult at birth and do not even know about the connection. When members of the cult realize that Simon and Elena, who are now working together, could discover the truth, they send Dee Dee and Ash to kill them. They kill Elena, but their plan to kill Simon fails.

All of Dee Dee's victims sent their DNA to a website that connects biological families, and Simon discovers that Paige had also used one of those sites. As he considers possible reasons, he learns that Ingrid has a secret. She had become involved with The Truth as a teenager and gave birth to a son. She was told the baby died but he had actually been whisked away and given up for adoption. Paige had found out about the child, who grew up to be a drug addict named Aaron, and she had initiated their first meeting. Simon eventually discovers that Aaron had continued to drag Paige into the drug life and that Ingrid, desperate to save her daughter, killed Aaron to stop the cycle. Ingrid never learned that Aaron was her biological son. Though Simon and Paige have realized that families cannot keep secrets from each other, they agree that they can never tell Ingrid that the drug addict she killed was her biological son.

More summaries and resources for teaching or studying Run Away.

Run Away from BookRags. (c)2022 BookRags, Inc. All rights reserved.