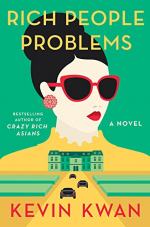 The following version of the novel was used to create this study guide: Kwan, Kevin. Rich People Problems. Anchor, May 23, 2017. Kindle.

In the novel Rich People Problems by Kevin Kwan, the members of Shang Su Yi’s family had various reasons to visit the family matriarch in her last days — greed, curiosity, social pressure, and in some cases love and devotion. Family members speculated over who might inherit Tyersall Park, the family’s ancestral home, and what might happen to the property. Meanwhile, one of Su Yi’s favorite grandchildren, Astrid Teo, was embroiled in a nasty divorce that threatened her position in the family. In another plotline, Kitty Bing struggled to outdo her step-daughter, Colette, a contest that brought her directly into a position to financially help Nick Young have his grandmother’s home declared a historical site, all because she did not want Colette to get possession of the house.

When news spread that Su Yi had suffered a major heart attack and would not live much longer, her family members flocked to her home to say their goodbyes. The self-important Edison “Eddie” Chang, tried to take charge of the situation believing that he could still influence his grandmother to leave him her estate. Eddie twisted his grandmother’s words and made his family members believe that she did not want to see Nick, who had once been her favorite grandson. Meanwhile, Astrid, another favorite grandchild, was ousted by the family because she snuck off to India and got engaged to Charlie Wu even though Astrid was technically still married. Paparazzi photos got back to the family, photos for which Astrid suspected that her estranged husband, Michael Teo, was responsible.

A guard overheard an argument between Eddie and his mother, Alix, in which Eddie admitted that Su Yi had not really told him that she did not want to see Nick. Knowing their future would be more secure if Nick inherited the house, the guards and maids arranged for Nick and Astrid to be snuck into the house through a tunnel used in World War II. The reader learned when Su Yi asked to see Astrid’s engagement ring that she had not only given Charlie her blessing to marry Astrid, she had helped him plan the proposal. After her visit with Nick, Su Yi felt well enough to join the family for breakfast, but she died later that day.

When the will was read, it was unveiled that certain percentages of ownership of Tyersall Hall had been left to all of Su Yi’s children and two of her male grandchildren. Su Yi’s son wanted nothing to do with the estate even though he owned the largest portion. Her daughters believed their mother intended to sell the house and began searching through offers to find the highest bidder. Nick was the only shareholder who believed that his grandmother wanted the house to be preserved for future generations because of the role it had played in World War II.

During a conversation with Nick, Ah Ling, Su Yi’s head housekeeper, remembered that she had some things that Su Yi wanted Nick to have. The package included a letter instructing Nick to have Catherine help him locate a man named Jirasit Sirisindhu. Jirasit turned out to be Su Yi’s lover and Catherine’s father. He had Su Yi’s journals which Nick read and realized the important role that Su Yi and Tyersall Park had played in World War II.

Nick spearheaded a project to have the house added to the national historic registry. He was three billion dollars short on the money he needed to buy out his aunts. Kitty was happy to be a secret investor when she learned that Jack had given Tyersall Park to Colette as a wedding gift. Her donation blocked the sale of the house meant her step-daughter could not live there. A year later friends of Rachel and Nick celebrated their wedding at the Tyersall Park Hotel and Museum.