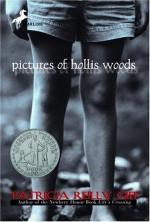 Patricia Reilly Giff
This Study Guide consists of approximately 48 pages of chapter summaries, quotes, character analysis, themes, and more - everything you need to sharpen your knowledge of Pictures of Hollis Woods.

This detailed literature summary also contains Topics for Discussion and a Free Quiz on Pictures of Hollis Woods by Patricia Reilly Giff.

In First Picture, Hollis draws a picture of a family for her homework assignment, which is to depict something beginning with the letter W, but her teacher marks it with an X because she does not understand that W is for wish or want. In chapter one, Hollis is sent to live with Josie Cahill, and when Josie takes Hollis to the canal in chapter two, Hollis decides to stay with Josie for a while. Second Picture shows Hollis meeting the Old Man and Steven, and in the Third Picture, they teach her how to fish. In chapter three, Hollis realizes that Josie forgets things sometimes, and Beatrice praises Hollis' artistic abilities in chapter four. In Fourth Picture, Steven takes Hollis halfway up Old Man's Mountain, and Hollis tells the Old Man about where she was found in the next picture. In chapter five, the social worker catches Hollis skipping school, and after Beatrice goes to New Mexico to paint in chapter six, the mustard woman plans to send Hollis to a new family in chapter seven, causing Hollis to convince Josie to run away to Branches in chapter eight. In the Sixth Picture, Steven teaches Hollis how to drive, and Hollis overhears the Old Man and Izzy planning to adopt her in the next picture.

In the Eighth Picture, the Regans tells Hollis of their plan to adopt her, which they celebrate with a cake in the Ninth Picture, and this is also when Hollis decides to climb the mountain and tell the world she has finally found a family. In chapters nine and ten, Hollis and Josie drive to Branches and break into the Regans' summer house. In chapter eleven, Hollis goes fishing, hiding when she notices a person across the river. She wonders what the Regans would think about her staying in their house in the next chapter. Hollis draws a picture of Josie and Beatrice as Josie's Christmas gift, but she realizes that Josie is sad and homesick. In the Tenth Picture, Hollis plans to climb the mountain and announce to the world that she belongs to a family, and in the next picture, she hurts her ankle when she climbs the mountain, but luckily, Steven drives the truck up the mountain to rescue her; however, the truck overturns and Steven is hospitalized. Hollis runs away in the Twelfth Picture because she fears she has ruined the whole family by trying to join them. In chapter thirteen, Hollis finds Steven's sweater on the shed doorknob, and after exchanging Christmas gifts with Josie in chapter fourteen, Hollis realizes that Josie wants to go home.

In the Thirteenth Picture, the Old Man tries to convince Hollis to come home, but she refuses because she knows he will continue blaming Steven for everything. Looking at the pictures she has drawn in chapter fifteen, Hollis realizes that Josie belongs with Beatrice and that the Old Man loves Steven whether she is with them or not. As Hollis walks to the nearest phone booth to call Beatrice in chapter sixteen, Steven pulls up beside her on a snowmobile, admitting that he has been providing her and Josie with food because he knew she would come to the house in Branches as soon as he learned she was missing. Hollis admits she left the Regans because she blamed herself for the fights between the Old Man and Steven. Laughing at her, Steven asks Hollis to come home before giving her a ride to the phone. In chapter seventeen, Hollis calls Beatrice who agrees to come home and live with Josie, and when Steven calls Izzy, Hollis asks if she can come home. In the Fourteenth Picture, Hollis draws a family like in her W picture, but it is different because she is holding Christina, her six-week-old sister; Hollis finally has a family.

More summaries and resources for teaching or studying Pictures of Hollis Woods.