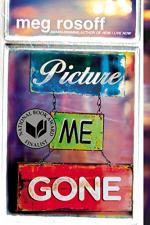 Related Topics
How I Live Now

Meg Rosoff
This Study Guide consists of approximately 52 pages of chapter summaries, quotes, character analysis, themes, and more - everything you need to sharpen your knowledge of Picture Me Gone.

This detailed literature summary also contains Quotes and a Free Quiz on Picture Me Gone by Meg Rosoff.

When 12-year-old Mila and her father go to America to help locate her father’s best friend, Mila never dreams how her perception of life will change. In the novel “Picture Me Gone” by Meg Rosoff Mila’s life is turned upside down when she realizes her father, who she believed was honest to a fault, lied to her about being in touch with Matthew all along. When she meets Matthew in person, Mila is drawn into the dark world of his pain and hopelessness. Despite her youth and her hope that she and her father could help Matthew, Mila comes to the realization that Matthew is the only one who can save himself.

When they begin their trip from London to America, Mila is excited at the prospect of being able to help her father find his missing friend. She hopes they will be able to reconnect Matthew with his wife, Suzanne, and infant son, Gabriel. Mila believes she’s going to watch over her father and to help solve a mystery. At her birth, Mila was given the same name as her grandfather’s dog. Mila believes she inherited some of that dog’s qualities of perception and tenacity. She has a good sense of her surroundings and is able to read situations and people easily. She hopes these abilities will come in handy when she’s helping her father look for Matthew.

Once in America, Mila notices right away that the house in which Matthew and Suzanne live together does not appear to house much happiness. She suspects Suzanne is having an affair. Mila also learns their relationship is stressed because Matthew was driving the car the day that Owen, he and Suzanne’s first child, was killed in a traffic wreck. Owen had been riding in the backseat, an arrangement Mila finds strange, and was killed when a tractor trailer smashed the back of the car. His father was not injured.

Mila and her father drive to a camp Matthew owns near the Canadian border. They find that Matthew’s ex-girlfriend Lynda is living there with Matthew’s teenage son Jake who is almost exactly the same age Owen would have been if he had lived. The more Mila learns about Matthew, the more she dislikes him even though he was her father’s friend.

Mila’s trust in humanity reaches a breaking point when she finally realizes what she believes she should have known all along. Her father has been in touch with Matthew the whole time. Once she has this information Mila understands why she did not really feel that her father was as worried about Matthew as she thought he should be. Mila is devastated by the realization that her parents, the one set of people she depended upon to tell her the truth, have lied to her. She is also distraught as she listens to her father try to communicate with his old friend without ever really asking the right questions or realizing how deeply set his friend really is on ending his life.

More summaries and resources for teaching or studying Picture Me Gone.