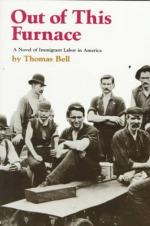 Out of This Furnace Summary & Study Guide

Thomas Bell (novelist)
This Study Guide consists of approximately 53 pages of chapter summaries, quotes, character analysis, themes, and more - everything you need to sharpen your knowledge of Out of This Furnace.

Out of This Furnace Summary & Study Guide Description

Out of This Furnace Summary & Study Guide includes comprehensive information and analysis to help you understand the book. This study guide contains the following sections:

This detailed literature summary also contains Topics for Discussion and a Free Quiz on Out of This Furnace by Thomas Bell (novelist).

Out of This Furnace by Thomas Bell is the story of a Slovak family's immigration to America. The novel tells the story of one family and its trials and tribulations as they make their way from Hungary to America. The story of three generations of the Kracha family is given in the novel from the first immigrant in the family, George Kracha to the third generation represented by Dobie Dobrejcak. The reader follows the family as they make their way in America.

Out of This Furnace is written in novel form but it describes the life the immigrants faced when they came to America. It opens with George Kracha walking from his village in Hungary to board a ship. He spends his money for a party for a woman and arrives in New York with fifty cents in his pockets. He walks from New York to White Haven, Pennsylvania where his relatives work for the railroad. He begins his work career in America. He eventually follows his friends and relatives to work in the steel mills. The work is hard and the hours are long for subsistence wages. His wife takes in boarders, which is the only way workers can get ahead and accumulate savings. He opens his own business, and eventually loses everything.

The story continues with the next generation. George's daughter marries Mike, who works in the steel mills. She also takes in boarders. When Mike is killed in a steel mill accident, she has to make ends meet since there is nothing but $75 in benefits from the company. Her children comprise the next generation with Dobie as the main character. Each generation has it a little easier than the previous, but the work in the mills is still long and the wages low. Technology makes each generation's life a little easier but the reader watches as each generation is a little more Americanized than the previous one.

The reader also sees how the Great Depression affects the workers and how they cope with it. Dobie survives by doing illegal electric wiring for people whose power was cut off for non-payment. Collective bargaining and the right to organize were a part of Section 7(a) of the NIRA, one of the depression era programs.

This interesting novel also tells the story of the labor movement from the point of view of the workers. Dobie is active in organizing the steel workers. The full violence of the early days of the labor movement is not evident in the book, but there are things like firings and reprisals from management. Dobie is working two or three days a week when newer workers are working full time.

Out of This Furnace is an interesting and delightful novel. Readers will find the book informative about the kind of life the workers led and how they survived.

More summaries and resources for teaching or studying Out of This Furnace.

Out of This Furnace from BookRags. (c)2022 BookRags, Inc. All rights reserved.