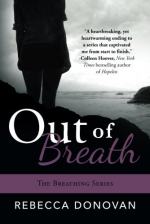 Out of Breath Themes & Motifs

Guilt is a theme of the novel. Emma is racked by guilt over her past. It makes her sabotage her relationships with her boyfriends and her friends. She leaves her hometown of Weslyn and her boyfriend, Evan, behind because she believes she will destroy his life. By leaving, she does destroy him. When she discovers how she wrecked his life, she feels even more guilt.

Emma tries to make Evan hate her to assuage her guilt. He does not want to hate her, but he wants to forgive her. Evan and her friends try to make her let go of her guilt and embrace her life. Her guilt makes her shut herself off from those around her feeling that she does not deserve happiness.

Her guilt is caused by the poor choices she had made in her life. She made these choices because she did not...

Out of Breath from BookRags. (c)2023 BookRags, Inc. All rights reserved.