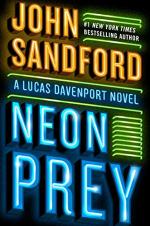 John Sandford
This Study Guide consists of approximately 54 pages of chapter summaries, quotes, character analysis, themes, and more - everything you need to sharpen your knowledge of Neon Prey.

The narrative begins with Clayton Deese, a killer who works for lawyer turned loan shark Roger Smith, carrying out a job for Smith. Smith wants him to crush the hands of a man named Howell Paine who owes him money and refuses to repay him. Roger wants to send a message to others as well as Roger. Deese goes to do the job, but runs into trouble when Powell resists and bites him, and a neighbor witnesses the attack and films a video. The police arrest him.

When Deese fails to appear at his trial, the authorities go to his home hoping to find him. U.S. Marshalls Rae and Bob as well as FBI agent Tremanty are amongst them. They discover that Deese has fled. As they search the swamps behind his house, the team discovers the bodies of people Deese has killed. They also discover that Deese is a cannibal. The knowledge that he is a cannibal as well as a killer causes Rae to call U.S. Marshall Lucas Davenport to help them find Deese. Rae and Bob do not think that the FBI tactics will be successful. Lucas agrees and joins the team.

When he arrives, Rae, Bob, and Tremanty brief him. He then tells Tremanty that he needs to start looking for Deese and his plan to get information from Smith. With Tremantry’s permission, he begins the hunt. The information Smith provides leads Davenport, Rae, and Bob to Los Angeles and Deese’s half-brother, Marion Beauchamps. Lucas thinks that Deese is staying with him. He is right.

Lucas recovers and the team resumes their hunt which now takes them to Las Vegas. This is where Beauchamps, Cole, Cox, and Deese fled to after the raid. Beauchamp’s gang suffers from not being comparable with Deese and a lack of funds to support their habits as the police retrieved most of the money they had after the raid in Los Angeles. They plan and implement a home invasion in order to get money. However, much of the stolen goods include jewelry that is difficult to fence. As that home invasion does not give them enough instant funds, they plan another one. The target is a man named Harrelson who is rumored to have the funds the gang needs. At the same time, Deese negotiates with Smith to get enough money to disappear. He tells Beauchamps, but does not want to tell the others. Beauchamps tells Cole because he trusts him.

While the gang tries to get money, Lucas and his team continue their search. They get a lead regarding where they live from the owners of the home the gang has already robbed. Then they learn that a man named Santos, Smith’s right-hand man who Lucas has met, is coming to Las Vegas. They think that he will lead them to Deese. They follow him when he arrives, but lose him. Santos goes to the designated address, but is early and only Beauchamps and Cox are there. Santos says the money is in the car and Beauchamps goes into the bedroom to call Deese. Deese warns him to be careful because Santos may try to kill them. As a result of the conversation, Beauchamps gets his gun. However, as he is not a killer, he forgets that the safety is on. Santos is also armed and thinks that Beauchamps went into the bedroom to get a gun. When he returns to Santos, a misinterpretation of movements causes Beauchamps to attempt to shoot Santos. He fails because the safety is on. Santos also shoots. He kills Beauchamps. Cox hides. After Santos leaves, she gathers the valuables in the house and goes towards the gang’s second house. However before she gets there, she hides the things of value and weapons that she took from the first house.

Lucas, Bob, and Rae find out about Beauchamps’ death because they are looking in the area for the house. They know that there is a second house due to what they learned after the raid in Los Angeles. Then they get a tip from a woman, who is Cox, about when Deese will be in a mall. It turns out that he set up another time to meet Santos to get the money. Cox and Cole do not trust him, so Cox gets a number to reach Smith from Deese’s phone and gets him to agree that she and Cole will get the money if Deese dies. She calls Lucas hoping that the police will kill him. There is a shoot out at the mall, but because she and Cole are supposed to be lookouts and Cole warns Deese when he sees the police, Deese gets away, but without the money. Santos is shot during the ordeal.

The gang members and Deese still need money so they decide to try to attempt the Harrelson robbery again. This time they succeed, but he does not have as much money as they thought he had. Deese instigates the kidnapping of Harrelson’s wife. As a result of this action, the police find Deese, but only after he kills Cole when they pick up the ransom money and Cox kills the hostage and Deese’s uncle Ralph, who they hide out with after the police find the second house.

At the end of the narrative, Smith pays for Cox’s and Santos’ legal expenses. Cox does not spend time in jail and starts her own home invasion gang. Santos spends a short period of time in jail. Lucas gets another case with no promises that he will not be shot.

More summaries and resources for teaching or studying Neon Prey.