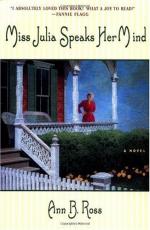 Ann B. Ross
This Study Guide consists of approximately 41 pages of chapter summaries, quotes, character analysis, themes, and more - everything you need to sharpen your knowledge of Miss Julia Speaks Her Mind.

This detailed literature summary also contains Topics for Discussion and a Free Quiz on Miss Julia Speaks Her Mind: A Novel by Ann B. Ross.

Miss Julia Speaks Her Mind is the entertaining tale of Julia Springer, a widow in her sixties prepared to enjoy a life of solitude and happiness, in part because her demanding and judgmental husband has passed, and in part because he has left a large estate that Julia had no idea existed. Despite her intentions, Julia's life is turned upside down when the illegitimate son of her deceased husband turns up on her doorstep.

Julia Springer lives a quiet life, the widow of one of the most respected men in town. After forty-four years as Mrs. Wesley Lloyd Springer, Julia has grown accustomed to the respect of those around her and spends quite a bit of her time judging her neighbors. Things change dramatically one morning when Hazel Marie Puckett arrives on her doorstep with Wesley Lloyd's son, telling Julia that since Wesley Lloyd has left them with nothing, she needs to travel to Raleigh and get some type of job training. Without much more information, Hazel leaves the boy with a stunned Julia and drives away.

Distraught over what her friends and neighbors will think, Julia discusses things with Lillian, her housekeeper, who is also her closest friend despite their very different lifestyles and upbringing. Julia also consults Deputy Coleman Bates, her boarder since Wesley Lloyd passed away. All agree that it is better to face the problem of Little Lloyd's paternity head on to avoid whispered gossip, and Bates will look into the whereabouts of Hazel Marie quietly.

As if the arrival of an unknown child is not enough to deal with, Larry Ledbetter, the pastor at Julia's church, seems intent on getting his hands on the money that Wesley Lloyd did not leave to the church. After appealing to Julia's sense of responsibility to the parish, Ledbetter tries another tactic, enlisting Dr. Fred Fowler to meet with Julia and decide whether she is competent to care for herself. The two men arrange to put Julia in a compromising position, and when she misconstrues Fowler's intentions, Ledbetter accuses her of being a danger to the men in town. If Julia will allow someone to be her guardian, then Ledbetter would never have to reveal her dark secrets.

Little Lloyd is taken by his uncle, Vernon Puckett, a televangelist, supposedly to see his mother, but when Hazel Marie arrives, beaten and battered, Julia realizes that yet another man has taken her for a fool. Comedy ensues as Julia, Lillian, and Hazel Marie get the boy back from Brother Vern.

Throughout it all, Julia relies on her friends, including her lawyers, Sam and Binkie. Binkie handles most things for Julia these days, but Sam has been a friend for a long time, and seems to want to be more. Julia has not idea how to deal with this situation, so for the most part she ignores it. Despite her wariness, it is Sam who Julia turns to when things begin to be too much to take.

The money that Julia inherited, that everyone seems to be trying to get their hands on, is also the means to her freedom from all her new troubles. The discovery of a new will leaving everything to Little Lloyd effectively ends Pastor Ledbetter's conniving plans to part Julia from her money. Brother Vern can lay no claims to the money or the boy, ending Hazel Marie's danger. Though Julia believes that she will be destitute, Sam informs her that she will not, as state law requires that the wife get half of an estate.

In the end, Julia and Hazel Marie wind up living in Julia's home, along with Little Lloyd. The two women share the estate of Wesley Lloyd, as they had shared him in life, though Julia had no knowledge of her husband's mistress or son until the fateful day they had arrived on her doorstep. Julia, once a judgmental and unforgiving woman by nature, has changed, happy to share the fortune her husband had left as well as the family she has always wanted and that her husband will never enjoy.

More summaries and resources for teaching or studying Miss Julia Speaks Her Mind: A Novel.