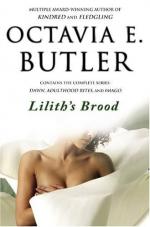 Lilith's Brood by Octavia E. Butler is the story of how Humanity was saved from the war it waged on itself by an alien species. The aliens, known as the Oankali, are nothing like Humans and while they revere life, they believe that to let Humans alone, only to destroy themselves again, is the same as allowing death. The story focuses on the Human resisters who want their freedom returned, regardless of the consequences, and the lives of the Oankali and Humans that are trying to work together.

Lilith is awakened on board an Oankali space ship and told that there is very little of the Human race left from a war that Humans waged on themselves. Lilith is picked as the Human who will lead the other Humans that will be reintroduced on the Earth's surface now, so that the planet can hold life again. The Oankali, a strange looking race, want to interbreed with the Humans and call it genetic engineering. The Humans that are awakened do not want this and eventually Lilith is deemed a traitor after helping to save the Oankali that Lilith has been mated with. When the other Humans are sent to Earth, Lilith is kept behind for her own safety.

Years later Lilith has a child that is part Oankali and part Human that is abducted by a group of Human resisters. The child, Akin, is taken to a village called Phoenix, and left there to learn about the Humans. Akin realizes that the Human resisters are being mistreated. When Akin is old enough he starts campaigning for the Humans to be able to start a colony on Mars where they will be free from the Oankali influence.

Lilith has another child much later named Jodahs. Jodahs is the first ooloi Human and Oankali mix. Jodahs goes into exile in the forest with its family since it is the first of its kind and is considered dangerous. Jodah happens upon a brother and sister who are Humans and who come from a group of fertile Humans that have been hiding in the mountains. Jodahs choose these two Humans as its mates. Together they go and tell the others in their village of the Mars colony but say that they cannot stay where they are since the Earth will be inhabitable when the Oankali are finished with it. The Humans are not trusting of Jodahs but eventually it heals all of them of the genetic defects that they have from years of interbreeding. Several of the Humans chose to stay and find ooloi mates, like Jodahs, rather than go to Mars.