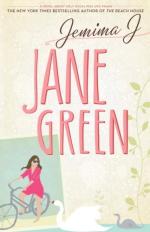 Jane Green (author)
This Study Guide consists of approximately 44 pages of chapter summaries, quotes, character analysis, themes, and more - everything you need to sharpen your knowledge of Jemima J..

Jemima J.: A Novel About Ugly Ducklings and Swans Summary & Study Guide includes comprehensive information and analysis to help you understand the book. This study guide contains the following sections:

This detailed literature summary also contains Topics for Discussion on Jemima J.: A Novel About Ugly Ducklings and Swans by Jane Green (author).

"Jemima J.: A Novel About Ugly Ducklings and Swans" is a novel about self worth, and about learning to value ones self regardless of body size. It is a journey of discovery, and one that shows body size is not a determiner of happiness.

"Jemima J" is a story about a young woman's journey to find herself. Jemima is a kind, generous, caring young woman whose heavy size often makes her unhappy. She lives with two tiny women who often make her feel even worse, and works with Geraldine, another gorgeous young woman. Geraldine, however, befriends Jemima, and in her, Jemima realizes that beautiful women are not always cruel. Jemima works with Ben Williams, as well, and she is head over heels in love with him, but although Ben does like Jemima, he is not romantically interested. When Ben and Jemima take an internet class, Jemima discovers the world of online dating, and soon meets Brad, a wealthy, buff, handsome man in California. Jemima pretends to be thin, and the two begin an online relationship. As she talks more to Brad, she finds the willpower she needed, and begins losing weight. She joins a gym, and becomes obsessed with exercise and eating, but she does rapidly lose the weight. Unfortunately for her, by this time, Ben has taken another job as a television presenter, and is no longer in contact. But Brad, her internet love, is dying to meet her, so J.J., as she now calls herself, flies to LA. Brad is everything she dreamed of, but although they get along well and have a successful intimate relationship, Jemima feels something is wrong. She does agree, however, to stay another three months. Eventually, however, she comes to learn that in reality, Brad is in love with his heavy assistant, but because he is obsessed with how things appear, he needed a "trophy" wife. Jemima is crushed and wants to return to England, but cannot afford the ticket change, so she must remain another two months. J.J. soon learns Ben is in LA, however, and the two meet up again. Ben falls immediately in love with the new J.J., but when he returns to England, he loses her phone number. Jemima is again crushed when Ben doesn't call, but a phone call to her good friend Geraldine straightens out the issue. Geraldine and Ben send Jemima enough money to return home, where Jemima moves out of her flat and in with Geraldine. Eventually, she and Ben marry.

"Jemima J.: A Novel About Ugly Ducklings and Swans" is a good reminder that size isn't everything, and that a person's happiness comes from the inside, not from how they look. Jemima learns, over the course of the novel, that while being healthy is important, obsessing about weight and images only leads to unhappiness. It is only by being happy with ones self that one is really able to enjoy life.

More summaries and resources for teaching or studying Jemima J.: A Novel About Ugly Ducklings and Swans.