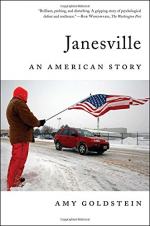 Amy Goldstein, a reporter for the Washington Post, presents the story of Janesville, Wisconsin. The town was highly dependent on the General Motors (GM) plant that employed thousands of workers until 2008. In the spring, GM officials announced that the Janesville assembly line would be closing within two years. Over the next few months, the auto industry as a whole struggled, and GM moved that date up to December 23. When the last Tahoe rolled off the assembly line, workers were tearful. Few were optimistic about the future. However, the plant had closed a few times in the past century of operation, and the jobs had always returned. Many held onto that hope and set out just to survive for the short-term.

Many employees had lived at the upper edge of what the $28-an-hour paycheck could buy. When it was gone, they were faced with the decision of whether to relocate and work at another GM plant or look for a job locally. Some set out to get an education to prepare for another kind of work. Officials at Blackhawk, a local technical school, met the influx of students with optimism. The college quickly created new classes to accommodate the students and set up new training courses they hoped would provide a direct line to jobs. They were largely unsuccessful for several reasons, including that many of these workers from assembly-line jobs had minimal computer skills – or none at all. They were unprepared for the demands of being a student. A local Job Center set out to help, but the majority of programs were aimed only at getting workers trained for some other field.

While there were thousands directly affected by the closing, the effects rippled down into the community. Companies that supplied goods and services to GM were forced to lay off or shut down when their GM contracts ended. Those companies and individuals who provided services to GM workers were similarly affected. A woman who ran. a daycare, for example, lost most of her clients because out-of-work parents kept their children at home.

Political jockeying became heated at times, with several politicians making promises they could not keep and others swearing that the situation was mended, though thousands remained jobless in Janesville. Community leaders were sometimes divided along specific lines, including on decisions of what was likely to help the economic situation. A few years after that initial GM announcement, those lines of division remained. There were essentially two Janesvilles. On one side were those who had emerged unscathed or who had found a way to recover. On the other were those who had given up on having the lifestyle they had while they were GM employees and who were forever changed.