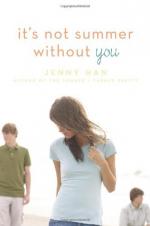 Related Topics
To All the Boys I've Loved Before
Always and Forever, Lara Jean
P.S. I Still Love You
The Summer I Turned Pretty
We'll Always Have Summer

It's Not Summer Without You Summary & Study Guide

Jenny Han
This Study Guide consists of approximately 41 pages of chapter summaries, quotes, character analysis, themes, and more - everything you need to sharpen your knowledge of It's Not Summer Without You.

It's Not Summer Without You Summary & Study Guide Description

It's Not Summer Without You Summary & Study Guide includes comprehensive information and analysis to help you understand the book. This study guide contains the following sections:

This detailed literature summary also contains Quotes and a Free Quiz on It's Not Summer Without You by Jenny Han.

The following version of this book was used to create this study guide: Han, Jenny. It’s Not Summer Without You (Summer Series). Simon and Schuster. 2010, Kindle.

It’s Not Summer Without You is the second novel in Jenny Han’s Summer series. It is narrated in first-person past by Belly and Jeremiah. The book opens with a daydream Belly was having about being in Summer with her family, Susannah, Jeremiah, and Conrad. However, the daydream was broken up by Taylor, Belly’s best friend, who called her to attention and brought her back to the reality where Susannah was dead and, for the first time in Belly’s whole life, no one was going to visit the beach house in Cousins where they all spent every summer together.

The summer before, Susannah’s cancer had returned just when Belly and her longtime crush, Conrad, were falling in love with one another. They started seeing one another during the fall and winter, but in the spring, when Susannah’s health took a turn for the worst, things fell apart. Belly forced Conrad to come to prom with her by threatening to go with another boy if he refused. Conrad agreed to come but was miserable the whole time and forgot to bring Belly a corsage. Belly assumed all this meant that Conrad wanted to break up with her, so she broke up with him first and ran away crying. They did not see or speak to one another until Susannah’s funeral a month later.

At the funeral, Belly could tell Conrad was upset, so she promised herself she was going to be strong and supportive for him, even though she was also grieving for Susannah, who was like a second mother to her. However, when Belly walked in on Conrad talking to his ex-girlfriend in the basement, she had a complete temper tantrum and told him she hated him and never wanted to see him again in front of everyone they knew. Since then, Belly had been in a dark depression that seemed to have no solution.

On the Thursday before Fourth of July weekend, Conrad’s brother, Jeremiah, called Belly and told her that Conrad had disappeared from Brown and was in danger of failing his summer classes that he was taking to make up the classes he failed during the school year. Jeremiah, who had a crush on Belly, but who had not spoken to Belly since the funeral, asked Belly to help him find Conrad. Believing that this would be an excellent way to make up for what she had said at the funeral, Belly told her mom she was going to Taylor’s house and snuck away with Jeremiah.

On Friday, Belly and Jeremiah drove to Brown and went to Conrad’s dorm. They ran into a girl who told them that Conrad went surfing. They realized he was at the beach house. Before they left, Belly grabbed Conrad’s laptop and textbooks so he could study, and she found an infinity-symbol necklace hiding in one of his drawers. She realized that the necklace was meant for her, and that he did truly love her. She put the necklace on and hid it under her shirt.

Belly and Jeremiah drove to the beach house in Cousins and found Conrad. Conrad was annoyed that they were there and told them they should just leave. Instead, they stayed and drank beer with Conrad, but he was in a bad mood, and he did not speak to Belly. However, he slowly started to warm up over the course of the day.

On Saturday morning, while Jeremiah was out, a real estate agent arrived and argued with Conrad about selling the house. Conrad explained to Belly that his father was trying to sell the house to get rid of Susannah’s memory because he had cheated on her and felt guilty. Conrad was not skipping school for fun, but to save his mother’s house. Conrad asked Belly not to tell Jeremiah, and she agreed.

When Jeremiah got back, the brothers went surfing. While they were out, Mr. Fisher arrived and announced that he was selling the house and there was nothing they could do about it. After he left, Jeremiah and Conrad argued, and Jeremiah stormed off. He returned a few hours later with a lot of liquor for a proper Fourth of July party to say goodbye to the summer house.

Belly got drunk at the party and danced with Jeremiah. She ran outside to swim in the ocean and Conrad chased her to tell her not to go into the water. She cried and apologized for what she had said at the funeral. They nearly kissed, but then Conrad went inside. Belly went to her room and called her mother, Laurel.

Laurel arrived at the beach house on Sunday morning and fought with Belly for lying and drinking. Belly told her she wished Susannah was her mother and that Susannah would be ashamed of Laurel for not saving the house for her kids. Laurel slapped Belly, and then Belly ran outside crying. When she came back inside, Laurel apologized and agreed to talk to Mr. Fisher. She invited him over for breakfast and argued with him until he agreed not to sell the house so long as Conrad went back to Brown and passed all his finals.

The adults left and the three kids stayed up all night studying. In the morning, they drove back to Brown together. Conrad took his first few tests and then met back up with Jeremiah and Belly. He picked Belly up and twirled her around happily. Jeremiah got jealous. When Conrad went to take his last test, Jeremiah and Belly went to wait in the car. Jeremiah kissed Belly and she kissed him back. Conrad came out and saw them. Belly ran after Conrad, and he realized she was wearing the necklace he had bought for her. He demanded she give the necklace back and run back to Jeremiah since Conrad had never really wanted her anyway. Belly gave him the necklace.

The trio headed back to Belly’s house but got stuck in traffic because the highway was shut down. They spent the night in a motel. After Jeremiah went to sleep, Conrad told Belly he had not meant what he said. In the morning, she thought things would be different with him, but he said his friend was picking him up and taking him back to campus. She told him goodbye and left with Jeremiah, and they held hands as they drove away. In the epilogue, Belly is seen running away from a wedding with an unspecified man.

More summaries and resources for teaching or studying It's Not Summer Without You.

It's Not Summer Without You from BookRags. (c)2022 BookRags, Inc. All rights reserved.