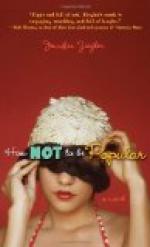 How Not to Be Popular Summary & Study Guide

Jennifer Ziegler
This Study Guide consists of approximately 23 pages of chapter summaries, quotes, character analysis, themes, and more - everything you need to sharpen your knowledge of How Not to Be Popular.

How Not to Be Popular Summary & Study Guide Description

How Not to Be Popular Summary & Study Guide includes comprehensive information and analysis to help you understand the book. This study guide contains the following sections:

This detailed literature summary also contains Topics for Discussion on How Not to Be Popular by Jennifer Ziegler.

Sugar Magnolia Dempsey or Maggie Dempsey to her peers, is angry with her parents because they are making her move once again. This time she is leaving Portland, Oregon and her beloved boyfriend, Trevor.

Within days of leaving Portland, Oregon, Trevor has already called off their agreement to a long-term relationship and Maggie finds herself in the back of her parents Hearst traveling south to Austin, Texas with her heart broken. She vows to not make friends in Austin and to do everything in her power to remain unpopular. She believes that if she refuses to befriend anyone then it won't hurt so much when her parents want to leave in four months.

In Austin, her parents, Les and Rosie, aging hippies, manage a second-hand vintage clothing store. The family lives in an apartment above the store. Normally, Maggie is open with her parents but she has neglected to tell them about Trevor or her plan to not make friends.

To secure her place as an unpopular student, Maggie chooses crazy and ugly ensembles to wear from the clothing store. She sits with the unpopular awkward girl, Penny, and is rude to Miles, the popular boy who likes her. But after weeks of her charade, she finds that people are beginning to copy her and that she is beginning to like Penny and Austin.

To beef up her resume for college applications, Maggie joins the club that Penny is in the Helping Hands, a service club. A boy in her homeroom, Jack, whom she's starting to like is also the president of Helping Hands. Even though she tries to sabotage the dates she goes on with Jack, she discovers that she still likes him and he likes her.

The Helping Hands plan a dance and Maggie's mother helps secure a great band. The whole nights goes really well and Maggie realizes that even though she chose a group of people that she deemed unpopular, she still likes them and she really likes Jack. Since she's afraid her parents are going to make her move any day, she publicly embarrasses her friends and pretends to be one of the mean girls. Later that same evening Les and Rosie tell Maggie that they've decided to stay in Austin.

Maggie knows that she must do something big to earn back the trust of the Helping Hands, Penny and Jack. During the Homecoming Assembly, in which she has been nominated for Homecoming queen, she takes the microphone and apologizes for her behavior in front of the school. Her friends forgive her and she realizes that it is better to be friends with the awkward and unpopular people. She finishes the remaining school year in Austin and finally feels that her family is "home."

More summaries and resources for teaching or studying How Not to Be Popular.

How Not to Be Popular from Gale. ©2005-2006 Thomson Gale, a part of the Thomson Corporation. All rights reserved.