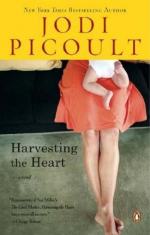 Jodi Picoult
This Study Guide consists of approximately 93 pages of chapter summaries, quotes, character analysis, themes, and more - everything you need to sharpen your knowledge of Harvesting the Heart.

This detailed literature summary also contains Topics for Discussion and a Free Quiz on Harvesting the Heart by Jodi Picoult.

Harvesting the Heart by Jodi Picoult is a touching story about a woman who has never known a mother and therefore has no reason to believe she can be a successful mother herself. Paige has run away from one romance and the possibility of parenthood into a marriage with a successful surgeon that leaves her often dealing with the stress of life on her own. When Paige becomes a mother, she does not measure up to her own expectations and runs away, just like her own mother did. However, Paige soon realizes she does not have to do what her mother did and that love is the only thing that truly matters. With Harvesting the Heart Jodi Picoult has delivered a novel that is not only heartwarming, but also deals with doubts every mother has experienced. The novel portrays how one woman triumphs over those doubts.

Paige O'Toole barely remembers her mother because she left when she was just five. Although Paige has a loving father, she feels her mother's absence in everything Paige does. When Paige commits a sin against her father's Catholic beliefs, she feels as though she has no choice but to run away and begin her life elsewhere. Within a few weeks, Paige has a job and meets the man she marries.

Paige is a wonderful artist. When Nicholas, a medical student at Harvard, comes in to the diner late one night, Paige draws his portrait. In the portrait, Paige captures deep secrets about Nicholas that he has never shared with anyone. Paige's ability to do so, draws Nicholas to Paige. Although Nicholas has a girlfriend, he cannot get Paige out of his mind. Nicholas impulsively asks Paige to marry him. It seems like a fairy-tale romance, until Nicholas and Paige tell Nicholas' parents.

Nicholas' parents are wealthy--his father is a successful doctor and his mother a famous photographer. Nicholas is born late into their lives after they try for more than a decade to have a child. Nicholas grows up with everything he can possibly want and believing this is how all children are raised. Nicholas never fails at anything and never has anything refused to him by his parents. When Nicholas' parents threaten to disown him if he marries Paige, Nicholas is not sure how to handle the situation, only knowing Paige is the woman he loves.

Nicholas and Paige get married with a lie between them. Paige is afraid to tell Nicholas, who believes her to be a virgin, that she has had an abortion. Paige was in love with a boy she meets on a blind date and hopes to one day marry. However, when Paige becomes pregnant a few months before her high school graduation, she knows she is not ready to be a mother. She does not want to begin a marriage because of a child. An abortion seems like the only answer, but the abortion drives an indestructible wedge between her and her boyfriend, as well as disappointing her Catholic father. Paige decides the only thing she could do is to run away as soon as graduation is over.

Paige and Nicholas make their marriage work for seven years with Paige working two jobs in order to pay off Nicholas' mounting student loans. When Nicholas finishes his internship, he insists on buying a house they cannot afford in order to make a good impression on the social hierarchy of the hospital where Nicholas hopes to be head of cardiothoracic surgery one day. Paige is unhappy in the house, which is devoid of color and is unhappy at the parties Nicholas expects her to attend because she does not fit in with the other wives. Things become more difficult for Paige when she learns she is pregnant.

Paige is convinced she will not be a good mother because she does not have a good role model. All Paige's fears seem to come to pass when the baby is born and she does not automatically know how to care for him. With Nicholas' lack of help and Paige's sense of isolation, Paige becomes desperate for an escape. When the baby falls and gets a bloody nose, Paige runs away, convinced the baby will be better off without her.

Paige goes home to her father, suddenly convinced that if she finds her mother she can figure out how to be a good mother. Paige meets her ex-boyfriend again while waiting for a private detective to find her mother and realizes that Nicholas is the only man she wants to be with. However, Paige will not go home until she knows she can be a good mother to her baby. Paige goes to her own mother and finds her running a riding school in North Carolina in order to pay for her show horse.

Paige does not get the answers she wants from her mother during the three months she spends with her. Paige does reconnect with herself, however, and discovers that the answers are always inside of herself. Paige returns home to Nicholas and Max, hoping to be a better wife and mother than she was before. However, Nicholas is not as receptive as Paige would have liked. Nicholas has had a hard time since Paige left and is forced to reconnect with his own parents in order to utilize them as babysitters. Nicholas is also unsure of Paige's feelings for him, afraid she has only come back to take his child away.

Paige moves in with Nicholas' parents and attempts to convince Nicholas that she is back for good, while Nicholas tries to convince himself that divorce is the only option. When Max becomes ill, Nicholas is forced to realize that Paige is still the only woman he loves. Paige finally realizes she is stronger than she had previously believed and is able to stand strong for herself and for Nicholas. There will be no more running away for Paige.

More summaries and resources for teaching or studying Harvesting the Heart.