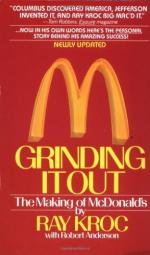 Grinding It Out Topics for Discussion

Ray Kroc
This Study Guide consists of approximately 26 pages of chapter summaries, quotes, character analysis, themes, and more - everything you need to sharpen your knowledge of Grinding It Out.

What would have happened to Ray Kroc if he would have never discovered the Multimixer? How would the world be different without him?

Ray was a very passionate man, yet all the money in the world was no match for love. Would he have accomplished more if he had his "Juni" earlier?

June and Harry stayed with Ray for years, June until the end. At first, they hardly made any money. What was it about McDonald's corporation that made them stay?

The timing of the end of the War had a lot to do with the evolution of Ray Kroc. Had he been able to serve, he wouldn't have worked for Lily brand when he did. What other circumstances led to his success?

Would McDonald's corporation have survived if Ray didn't get rid of the...

More summaries and resources for teaching or studying Grinding It Out.

Grinding It Out from BookRags. (c)2022 BookRags, Inc. All rights reserved.