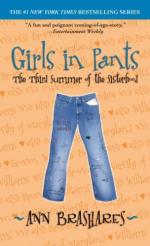 Girls in Pants: The Third Summer of the Sisterhood - Chapter 23 Summary & Analysis

Lena prepares to sketch her father and has the feeling in the back of her mind that it will be to show his anger properly. She understands that she must leave her own emotions behind and see him only with her eyes. In her father's eyes, she notices that there is fear, and she wonders what he is afraid of. She thinks that she knows: it is a fear of her independence and of her growing up and not being something he can be proud of. He is also afraid of growing older and losing the power he has created.

After two hours, Lena lets her father go, and she understands how much he has tried to please her. Later that night, Lena sees her father staring at his portrait and contemplating what its meaning is.

Win is driving Carmen's car while she...

Girls in Pants: The Third Summer of the Sisterhood from BookRags. (c)2022 BookRags, Inc. All rights reserved.