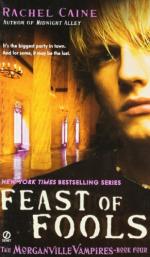 Rachel Caine
This Study Guide consists of approximately 35 pages of chapter summaries, quotes, character analysis, themes, and more - everything you need to sharpen your knowledge of Feast of Fools.

This detailed literature summary also contains Topics for Discussion on Feast of Fools by Rachel Caine.

"Feast of Fools" is the fourth of twelve novels in the Morganville Vampires series by Rachel Cain, a Texas-based author who was written more than 30 books in the paranormal, horror, and fantasy genres. It was published as a Signet imprint of Penguin's New American Library in 2009, having previously been published as a NAL Jam edition. "Feast of Fools" is set in Morganville, the site of the fictional Texas Prairie University. On the surface, it seems to be a typical American college town but is actually inhabited by vampires and the humans they interact with. Many of the town's locales are connected by a network of portals and wormholes allowing some of the vampires to move quickly between locales. The plot centers around a visit to Morgantown by a group of powerful, ancient, "old-school" vampires led by Mr. Bishop, who seeks to exercise control. The novel portrays the struggle between the followers of Amelie and the followers of Bishop, who is her father. The leading female protagonist, Claire, befriends an old vampire named Myrnin and tries to enlist her housemates (Michael, Eve, and Shane) in the battle against Bishop. The novel's climax is a grand masked ball organized by Bishop, to which all the vampires in town are expected to bring a human as a symbolic sacrifice, pledging their loyalty to Bishop. Pandemonium breaks loose at the ball when some of the characters, inspired by Claire and Myrnin, revolt against Bishop.

More summaries and resources for teaching or studying Feast of Fools.