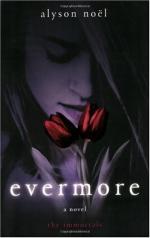 This detailed literature summary also contains Topics for Discussion and a Free Quiz on Evermore: The Immortals by Alyson Noël.

Ever Bloom is sixteen when her family is in their car and she realizes she's forgotten a favorite sweatshirt. Her father turns around in response to her pleas and has a wreck when a deer steps out in front of their vehicle. Her parents, sister, and the family dog are all killed. Ever also dies but lingers and is revived. She lives with the guilt that the accident was her fault. Ever moves in with her paternal aunt, a wealthy attorney who is lonely and worries that she's leaving Ever alone too much.

Ever's life is forever changed by her death experience. She is able to see auras, the glow that surrounds every living person and changes color in response to health and mood. She is also psychically charged and is bombarded by the thoughts and moods of everyone around her. In her new school, she sets aside her popularity in favor of a couple of friends who are outcasts. She distances herself from others in an effort to insulate herself from their thoughts and feelings.

Then Damen Auguste becomes a new student at Bay View High School and shares a couple of classes with Ever. Ever immediately realizes he has no aura at all and is puzzled by that fact. She also soon realizes that with one touch, Damen can eliminate the overwhelming influx of thoughts and emotions from Ever's psychic ability. Damen is very handsome and Ever isn't certain she wants to become involved but soon finds herself spending a great deal of time with him. When he isn't around, she begins to seek other ways to insulate herself from the psychic input. She tries alcohol with disastrous results. She then meets a psychic who helps Ever learn to distance herself and also addresses another issue in Ever's life - the presence of her younger sister who died in the crash. With Ava's help, Ever realizes she's holding her sister in a world in which she no longer belongs. Though Ever is afraid to lose Riley yet again, she does the right thing, releasing Riley to her own future.

Ever continues to try to figure out Damen and comes to realize that Damen is the one who pulled her back when she was dead. She tells him it was unfair and that he shouldn't have made that decision for her. She slowly realizes there's a bigger connection to Damen than she understands and initially believes him to be a vampire. Damen clarifies, saying he's actually immortal and that vampires are not real. However, Damen's wife Drina is also in the picture and Drina has spent centuries following Damen and killing Ever each time Damen meets up with her. Just when it seems Drina will win again, Ever's love for Damen becomes strong enough to overpower the evil intentions of Drina. Damen tells Ever that she has to be certain she wants to live as an immortal before she chooses that for herself and the two set out for a future together.