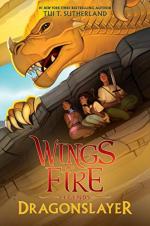 Tui T. Sutherland
This Study Guide consists of approximately 70 pages of chapter summaries, quotes, character analysis, themes, and more - everything you need to sharpen your knowledge of Dragonslayer.

Dragonslayer, by Tui T. Sutherland, is set in a world populated with humans and dragons. There are deep-rooted prejudices and misunderstandings between them. The events are presented from the perspectives of several humans, and they are often filled with fear because the dragons are so large and can inflict an enormous amount of damage in a short time. The humans covet the dragons' enormous treasure troves. Though stealing from dragons is dangerous and nearly impossible, some consider it worth the risk for the potential payout.

The novel opens with three siblings, Heath, Stone, and Rose, attempting to steal some of that treasure. When a dragon queen confronts them, Stone kills her. Her death prompts the dragons to seek revenge by burning a human city. Heath and Stone assume Rose is dead, but she ends up living with the dragons. She is considered the pet of a dragon prince. Heath claims credit for killing the dragon queen and becomes the leader of his town. He resettles the survivors after the dragon attack, choosing to live underground in a city named Valor. The humans build additional tunnels and seldom go outside except to gather food. Heath's daughter Ivy grows up here and comes to realize that Heath is a coward and a corrupt leader. He has become increasingly paranoid because of his fear that someone will steal his treasure.

Another human city is called Talisman. This city is ruled by three adults known as dragonmancers. They are also corrupt. They founded their town and their government based on their greed for more dragon treasure. They believe their prophecies to be the only way people can be safe from the dragons. When someone questions their rule, the dragonmancers insist they be sacrificed to the dragons, under the guise that the dragons have demanded that person as a sacrifice.

When Wren is only eight, the dragonmancers choose her. However, Wren refuses to accept her fate and gets away. After she befriends a tiny young dragon, they become so close that they learn to communicate, partly in human and partly in dragon. Wren becomes the first human who can interpret between the two species. She travels the world and meets the young prince of the Indestructible City, a boy named Undauntable. She learns through her interactions with him that all rulers seem to be corrupt and few humans are to be trusted.

Not knowing that Wren survived, Leaf sets out to get revenge by killing a dragon. Then, he discovers that it is almost impossible. Along with several other young people from his village, he questions the dragonmancers' authority. When he learns that they sent his sister to die, Leaf sets out to find the man known as the Dragonslayer. He is heartbroken when he learns the Dragonslayer is just a cowardly, corrupt man who is not able to help. However, he finds Ivy is courageous and inventive. Ivy, too, is opposed to the corruption of the human rulers. When Ivy has a vision that Rose is still alive, she joins Leaf and Stone on a quest that reunites them with Rose and Wren. The young people join forces with other like-minded humans who believe they can make the world a better place. Accompanied by Sky, Wren's friendly dragon, they begin to take steps toward that goal. Meanwhile, the ruler of the Indestructible City learns that Heath is a fraud, but there is a girl who can control dragons.

More summaries and resources for teaching or studying Dragonslayer.