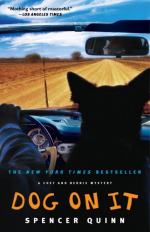 Dog on It: A Chet and Bernie Mystery Summary & Study Guide

Spencer Quinn
This Study Guide consists of approximately 74 pages of chapter summaries, quotes, character analysis, themes, and more - everything you need to sharpen your knowledge of Dog on It: A Chet and Bernie Mystery.

Dog on It: A Chet and Bernie Mystery Summary & Study Guide Description

Dog on It: A Chet and Bernie Mystery Summary & Study Guide includes comprehensive information and analysis to help you understand the book. This study guide contains the following sections:

This detailed literature summary also contains Quotes and a Free Quiz on Dog on It: A Chet and Bernie Mystery by Spencer Quinn.

Dog on It is a mystery novel written by Spencer Quinn. Narrated by a large mix-breed dog named Chet, the novel was published in 2009. In the novel Chet and his owner/partner private detective Bernie Little are hired to find fifteen-year-old Madison Chambliss by the girl’s mother. Although Bernie starts out believing that Madison is staying with friends and will return home on her own, this soon changes as he and Chet find that the real estate development owned by Madison’s father Damon Keefer is in serious financial trouble. As the case goes on, both Chet and Bernie almost lose their lives. Bernie realizes that not only has Madison Chambliss been kidnapped, but he and Chet have also been watched and targeted since the very beginning of the case. The first book in the six-part (to date) Chet and Bernie Mystery series, Dog on It is followed by Thereby Hangs a Tail, To Fetch a Thief, and most recently 2013’s The Sound and the Furry.

As Chet – the 100-pound canine narrator of the novel – and his owner/partner Bernie Little, a private investigator, are playing fetch out in their yard one night a car drives up to their house in the Valley. A woman named Cynthia Chambliss gets out and says that she wants to hire Bernie to find her 15-year-old daughter Madison, who didn’t come home from school that day. Bernie initially refuses, citing that Madison has only been missing a few hours, but finally agrees to take the case after Cynthia offers him a much needed $500 retainer. Chet and Bernie go to Cynthia’s house, search Madison’s room, and question Cynthia about her daughter. As they are leaving Madison comes through the door and says that she has been at the movie ‘Dr. Zhivago.’ Bernie asks Madison a question about ‘Dr. Zhivago’ and her answer tells him that she is lying about having seen the film, but also convinces him that she is a smart kid.

The next day a pretty reporter for the Valley Tribune named Suzie Sanchez spends the day with Chet and Bernie researching a story on Valley private detectives, and Chet can see that Bernie is attracted to her. The following afternoon, Cynthia Chambliss calls and tells Bernie that Madison has disappeared again, and has been gone for over a day. Chet and Bernie search Madison’s room again, and then head out to the North Canyon Mall where the theater that had been showing ‘Dr. Zhivago’ is located. Bernie leaves Chet in their old Porsche when he goes into the mall, and Chet falls asleep. A short time later a large blond man slashes the Porsche’s tires with a knife and then hits Chet with a blue car as he speeds away.

Chet is not seriously injured and the next morning he and Bernie interview the boy Madison claimed to have seen ‘Dr. Zhivago’ with. The boy tells them that Madison hadn’t been at the movies at all; she had been visiting a friend of hers named Ruben Ramirez and that she’d called him to give her a ride home after Ramirez had come on to her. Bernie and Chet then talk with Ramirez, who tells them that when Madison left his house that night a blond man in a blue BMW that Ruben didn’t recognize offered her a ride, which she refused. When Chet and Bernie return home Damon Keefer – Cynthia Chambliss’ ex-husband and Madison’s father – is waiting for Bernie and demands to know what progress he has made. Bernie refuses to discuss the case without Cynthia’s permission, and the three of them – along with Chet – meet later that afternoon at which time Keefer becomes a co-client with Cynthia. Later that night a strange noise wakes Chet up and he goes to investigate. Chet spots the blond man who slashed the Porsche’s tires and another man sitting in a blue car in front of a house down the street, and attacks the blond man. Chet is shot with a Taser and the two men – named Boris and Harold – load him into the trunk and drive away.

Chet is taken to a compound in the mountains where a cruel man with a Russian accent named Gulagov decides to train him for dog fighting, but Chet refuses to obey any of his commands. As Chet escapes from Gulagov and takes refuge in an abandoned mine on the compound he catches of glimpse of Madison Chambliss, who is also being held there. Chet digs his way out of the mine and then walks all day through a desert before he runs across a group of bikers at a campsite who give him food and water. The next day the bikers drop Chet off at an animal shelter in the small town of Sierra Verde and three days after that, as Chet is about to be destroyed, Suzie Sanchez – the reporter from the Valley Tribune – happens to come to the shelter, recognizes Chet, and takes him home to Bernie.

Chet and Bernie get back to work on the Madison Chambliss case and go to Pinnacle Peak Homes, a real estate development owned by Madison’s father Damon Keefer, where Bernie notices that a number of homes are under construction but that there are no contractors working on them even though it is a weekday. Bernie asks Keefer about the development’s financial condition, which Keefer says is fine, but their conversation is interrupted by a phone call that Keefer says is from his irrigation contractor. Bernie senses that Keefer is not telling him everything he knows about his daughter’s disappearance and the next morning he and Chet – along with Suzie Sanchez –track down Keefer’s irrigation contractor and pay him a visit. The contractor tells them that Keefer has owed him money for months and stopped taking his calls three weeks ago – which contradicts what Keefer told Bernie the day before. As they are driving home a friend of Bernie’s in the Valley Police Department calls and tells Bernie that Madison Chambliss has been spotted in Las Vegas.

Chet and Bernie drive to Vegas where they meet Damon Keefer and Cynthia Chambliss at the Golden Palm Movie Palace, where Madison had been spotted by the projectionist. Keefer tells Bernie that since it is obvious that Madison is a runaway his services are no longer needed. Chet and Bernie leave, but return to the Golden Palm later and question the projectionist, Anatoly Bulganin. As Bulganin tells them a story that Bernie doesn’t believe, Chet smells the scent of beets on Bulganin – the same scent that Mr. Gulagov had. After they drive home Bernie gets on his computer and makes a few phone calls and is soon able to confirm that Damon Keefer’s Pinnacle Peak development is a financial house of cards that is collapsing, that he owes money all over the Valley, and that no bank will do business with him. He and Chet then talk with a neighbor who tells Bernie that he thinks he saw two men throw Chet in the trunk of a blue car that had been parked outside the house with the For Sale sign on it down the street a few nights before. Chet and Bernie speak with the real estate agent handling the property who says that up until a few days ago the house had been rented by a blond man with an accent who had only stayed for two weeks. It becomes obvious to Bernie that he and Chet have been watched and targeted since they started the investigation into Madison’s disappearance, and that they need to find out why.

After an unsuccessful attempt to have Chet retrace his steps from the campsite where the bikers found him to wherever he’d been taken after being dog-napped, Chet and Bernie return to Sierra Verde and spot Anatoly Bulganin – the projectionist from Las Vegas –getting into a blue BMW. They chase him up a mountain road, but their old Porsche blows an engine gasket and goes over the side of a cliff. Chet is thrown clear and rescues Bernie who is clinging to a rock outcropping. When they are finally able to get home there is a message on the machine from Cynthia Chambliss that Madison called her and said she was coming home soon. When Bernie calls Cynthia back she is shocked to hear from him because Damon Keefer had told her just a couple of hours before that Bernie had been killed in a car wreck - a wreck that only Bulganin could have seen.

Chet and Bernie go to see Damon Keefer. Keefer again tells Bernie that he is fired and threatens to call the police, but Bernie questions Keefer about his finances again. He then asks why Keefer thought he’d been killed in a wreck, and Keefer says that he received an anonymous phone call. Realizing that Keefer will never tell him the truth, Bernie and Chet leave and visit one of their street contacts who puts them in touch with Albie Rose. Rose is an elderly loan shark who says that while he would never lend Damon Keefer money there is a new guy in the Valley who might do business with him – a Russian by the name of Gulagov. Chet barks when he hears the name.

When they get home Bernie works on his computer trying to find a connection between Gulagov and Keefer. Chet is picked up for an appointment with the dog groomer and when he is brought home, Bernie is gone. Suzie Sanchez comes over and after finding a piece of a whiteboard Bernie had been making notes on with the letters SV on it, she and Chet drive to Sierra Verde. While Suzie is in a convenience store there Chet sees the blond man Boris drive by in a pickup truck and manages to jump into the back of it without Boris noticing. A short time later they arrive at Mr. Gulagov’s compound and Chet finds Bernie tied to a post inside the abandoned mine. After Chet gnaws through the ropes he and Bernie are able to subdue and disarm Harold, who along with Boris had kidnapped Bernie, and another member of Gulagov’s gang. Harold tells Bernie that Damon Keefer owes Gulagov almost a million dollars and that Madison had been taken to make him pay. After Bernie shoots and wounds Boris, Gulagov appears holding a straight razor to Madison Chambliss’ throat and threatens to kill her unless Bernie drops his gun, but Chet jumps over Madison and tackles Gulagov, forcing him to drop the razor. A few moments later Suzie arrives at the compound followed by several police cars. Gulagov and his gang are arrested and later sentenced to prison terms, as is Damon Keefer who is convicted of conspiracy. Chet and Bernie receive a large bonus check from Cynthia Chambliss’ boyfriend, and Suzie Sanchez becomes a regular visitor at their house.

More summaries and resources for teaching or studying Dog on It: A Chet and Bernie Mystery.

Dog on It: A Chet and Bernie Mystery from BookRags. (c)2022 BookRags, Inc. All rights reserved.