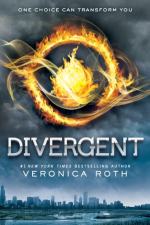 Veronica Roth
This Study Guide consists of approximately 38 pages of chapter summaries, quotes, character analysis, themes, and more - everything you need to sharpen your knowledge of Divergent.

This detailed literature summary also contains Topics for Discussion and a Free Quiz on Divergent by Veronica Roth.

In Beatrice's world, there are five factions that carry out the daily duties of civilized living. They are Abnegation which is in control of the government, Dauntless which is in charge of security both inside the city and at the city walls, Amity which is the faction that grows most of the food and fills the role of caregivers, Erudite which is in charge of education and research, and Candor which is in control of law and justice. A child is born to a faction, but once they reach about sixteen years of age, they are given an aptitude test to help them decide which faction they will live in for their rest of their lives. Those who choose to leave their own factions are free to do so but must pledge loyalty to that faction of their own family. The idea is sound with each faction teaching and cultivating the traits necessary for their functions, but the reality is jealousy and fighting among the factions.

Beatrice is a sixteen-year-old member of the Abnegation faction as the story opens. She has been raised to be completely selfless but doesn't believe she fits into the ideals of her faction. All teens around sixteen years old undergo an aptitude test designed to help them decide which faction they should join. Beatrice and her older brother, Caleb, are among the teens undergoing the testing on a particular day. Beatrice is tested by a member of the Dauntless faction who reveals that Beatrice's results tag her as a "Divergent." The woman tells Beatrice that she should never tell anyone what she is and that her life is in danger if she does. With only that information, Beatrice goes home and begins trying to decide which faction she'll chose. When the Choosing Day ceremony arrives, Caleb decides to leave the faction for the Erudites and Beatrice initially believes she'll have to remain in Abnegation because she hates the idea of leaving her parents alone. However, she does decide to leave and joins the Dauntless.

Once there, she discovers the leaders have lost sight of protecting the city and its residents. Instead, cruelty is taught and expected. She meets a Dauntless nicknamed Four and discovers he's the son of an Abnegation leader. Beatrice manages to survive the initiation process but uncovers a plot hatched by the Erudite to use the Dauntless to overthrow the Abnegation. The Erudites take control of the Dauntless through a simulation device and the members of the Dauntless faction wage a bloody war on the Abnegation. Beatrice's parents fall victim as do others before the situation is brought to a conclusion by Beatrice, Caleb, and Four. As the story comes to a close, the three are taken in by the Amity faction though Beatrice knows they can't hide there forever.

More summaries and resources for teaching or studying Divergent.

Divergent from Gale. ©2005-2006 Thomson Gale, a part of the Thomson Corporation. All rights reserved.