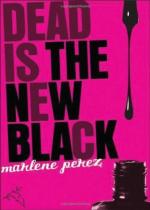 Dead Is the New Black Characters

Marlene Perez
This Study Guide consists of approximately 19 pages of chapter summaries, quotes, character analysis, themes, and more - everything you need to sharpen your knowledge of Dead Is the New Black.

Daisy is a teenage girl, a junior, that attends Nightshade High School in the town of Nightshade, California. Daisy is the youngest of three girls. They live with their mother because their father disappeared under mysterious circumstances.

Daisy's best friend is Ryan Mendez, who is the son of the police chief of Nightshade. Daisy and Ryan decide to work together o help their parents solve the case of a dead teenage girl that turns up in the Nightshade morgue and...

More summaries and resources for teaching or studying Dead Is the New Black.

Dead Is the New Black from BookRags. (c)2023 BookRags, Inc. All rights reserved.