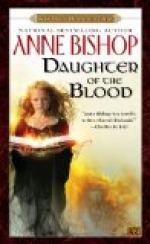 Daughter of the Blood Summary & Study Guide includes comprehensive information and analysis to help you understand the book. This study guide contains the following sections:

This detailed literature summary also contains Topics for Discussion on Daughter of the Blood by Anne Bishop.

Daughter of the Blood is the story of Jaenelle, an extremely powerful young girl destined to be Witch, an incarnation of Darkness itself. Jaenelle is still only a twelve year old girl, however, and is also kind and vulnerable. Unknown to her family, she often travels to the Realm of Hell where she meets the High Lord, Saetan. He becomes her secret tutor as well as a father figure.

Daemon, Saetan's son, is sent to serve the Queen of Chaillot, Jaenelle's grandmother. He meets Jaenelle and becomes her friend and protector. He hopes that one day she will be strong enough to defeat the evil Queen Dorothea and purge the corruption and cruelty from the Realm of Terreille. However, unknown to Daemon and Saetan, the 'hospital' that Jaenelle is sent to is actually a front for child abuse and rape. Jaenelle is targeted and retreats within her own mind. Daemon tries to save her, but only succeeds in healing her body; her mind is still shattered. Saetan promises to look after her body until she can find her way out of madness.

Terreille is a cruel place where matriarchal rule has been twisted into something corrupt and sadistic. Daemon and his brother Lucivar are forced to be sex slaves to the powerful Queens. They long for the prophesied coming of Witch, a powerful woman who will defeat Dorothea and restore Terreille to the fairer and kinder place that it should be. One day a child appears to Lucivar and he realizes that this must be Witch. He warns her not to go wandering in Terreille in case someone tries to hurt her.

Jaenelle visits the Realm of Hell where the demon-dead dwell, and meets the High Lord, Saetan. Saetan realizes who she is and agrees to become her tutor. He is constantly amazed by the powerful and seemingly impossible things she can do. He quickly warms to her and becomes a father figure to her. He revisits his old lover Cassandra, who also wants to protect Jaenelle.

Years pass and Jaenelle is now twelve years old. She builds a bridge from a place called Briarwood into Hell to help children find their way. Saetan wonders why so many children die at Briarwood and what it has to do with Jaenelle. One day she cries for help and Saetan merges his power with Daemon to give her extra power. Daemon is punished by the Queen he is serving, but Jaenelle visits him that night and heals him.

A month later, Daemon kills the Queen whom he is serving and visits an old friend who acted like a mother to him. He discovers the truth of his parentage - that Saetan is really his father and that the evil Queen Dorothea has been lying to him. Dorothea is furious that he killed a witch and decides to send him to a witch she does not like called Alexandra in Chaillot. When Daemon arrives, he hears stories about Jaenelle and her kindness. When he meets her, he is shocked to find that she is still a vulnerable little girl. He becomes her protector and her friend.

Jaenelle begins to mend Daemon and Saetan's relationship, encouraging them to get to know each other again. Unfortunately, Lucivar maims the witch that he is serving and is sent to the salt mines as punishment. Daemon will not allow Jaenelle to try to save him as it is too dangerous. Jaenelle meets Daemon's old friend Surreal and gives her a message from her dead mother.

One night a party is held at Jaenelle's house. It is a children's party but is really just a front for older men to rape young girls. Surreal attends and tells Daemon the truth about Briarwood and what happens there. Daemon tries to persuade Jaenelle to leave with him, but she will not abandon her sister. When the doctor from Briarwood tries to rape Jaenelle's sister, she screams and tries to tell her family the truth. They do not believe her and send her straight back to Briarwood. Daemon uses all his power to escape, breaking many people of their own power in the process. However, he is too drained to be able to save Jaenelle. Saetan has no idea what is happening so he cannot help either.

Surreal rushes to save Jaenelle but is too late. She has already been raped. Surreal kills Jaenelle's abuser and then carries her to the Altar of Cassandra. Surreal, Daemon, Saetan and Cassandra try to heal Jaenelle. Daemon is able to convince Jaenelle to heal her own body, but she retreats to the depths of her mind and refuses to come out. Cassandra takes her unconscious body back to Saetan, where they will look after it until she is ready to come out of madness into the real world again. Daemon stays in Terreille to help Surreal and Lucivar.