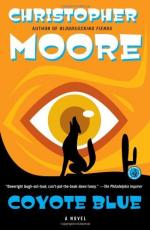 Christopher Moore
This Study Guide consists of approximately 46 pages of chapter summaries, quotes, character analysis, themes, and more - everything you need to sharpen your knowledge of Coyote Blue.

This detailed literature summary also contains Topics for Discussion and a Free Quiz on Coyote Blue by Christopher Moore.

"Coyote Blue" by Christopher Moore is an entertaining novel about a Crow Indian. After killing a police officer, Sam flees to Santa Barbara and becomes a successful insurance salesman. Coyote, his spirit helper, arrives and creates chaos in Sam's mundane life, ultimately concluding with Sam's happy return to his home and heritage. "Coyote Blue" is an interesting combination of Crow legends and chaos.

In Santa Barbara, Sam meets Calliope and a young Indian, while in Crow Country, Pokey has a spirit dream about Sam, Old Man Coyote and death. After Sam fails in his presentation at Motion Marine, Aaron angrily accuses him of sending an Indian to frighten Cable. Sam recalls Pokey giving him a dream in 1967. Sam has problems with his neighbors because of the coyote on his patio. When Sam goes home, he sees the coyote turn into the young Indian. In 1967, Sam takes his first sweat and is renamed. Sam picks Calliope up from work, and they schedule a date for the next evening. Sam recalls his vision in 1967 of Lloyd Commerce who Pokey believes is Old Man Coyote in disguise. Sam is voted out of his complex and threatens Spagnola. Sam returns to his office to find his secretary having sex with the young Indian who reveals himself to be Old Man Coyote.

In 1973, Pokey fails in his attempts to interpret Sam's vision. Sam goes to a party where he pushes Enos off a cliff into the dam wall two hundred feet below. Sam flees Crow Country and works as a busboy until he meets Aaron who teaches him to sell insurance and eventually makes Sam a partner in his insurance agency. Sam offers to sell his shares to Aaron, blackmailing him with the thought of bad publicity. On Sam's date with Calliope, he meets Grubb and learns about Lonnie. Due to Coyote's trickery with Lonnie, Tinker beats Spagnola up, and Spagnola calls a committee to allow Sam to keep his home. Calliope's nervousness about leaving Grubb with Lonnie proves justified when Lonnie kidnaps Grubb and goes to Las Vegas. Calliope follows, and Sam and Coyote trail after Calliope. In Las Vegas, Coyote loses all of Sam's money in the casino and sells Sam's car. M. F. is ordered to watch Coyote due to his odd behavior. Coyote steals the hotel's limo and follows Calliope. After Coyote informs Sam that he has found Calliope, Sam joins them, but Calliope has already left.

Sam and Coyote eventually join Calliope at Satori Japanese Auto Repair where M. F. also arrives to reclaim the hotel's limo. Calliope's car is fixed, and she, Sam and Coyote go to Sturgis, SD to retrieve Grubb. Coyote disguises himself as a woman and steals Grubb from the bikers. M. F. arrives to prevent the Guild from following Sam, Calliope, Coyote and Grubb, but he is beaten up by the bikers for his efforts. Lonnie shoots at Calliope's car as it pulls away, and Calliope dies. Sam, Coyote and Grubb travel to Crow Country where Sam visits Pokey and learns about the sacred medicine bundle and the ability to travel to the Underworld. Sam steals the sacred medicine bundle from Amstead Houston in Billings, but Coyote refuses to accompany Sam to the Underworld. With Pokey's help, Sam goes to the Underworld, but Anubis refuses to allow Calliope's soul to return to her body. Sam awakes, maddened, and fights the Guild. During the battle, Tinker shoots Coyote, and Coyote dies. When Sam returns home, Calliope awakes, and they marry and live happily in Crow Country and have a daughter. Grubb is raised as a Crow, and his eyes turn golden as he grows up.

More summaries and resources for teaching or studying Coyote Blue.