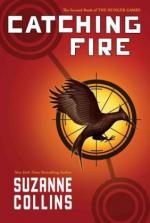 Suzanne Collins
This Study Guide consists of approximately 33 pages of chapter summaries, quotes, character analysis, themes, and more - everything you need to sharpen your knowledge of Catching Fire.

This detailed literature summary also contains Topics for Discussion and a Free Quiz on Catching Fire by Suzanne Collins.

Catching Fire by Suzanne Collins is the second in the Hunger Games series. Catching Fire begins several months after the end of the Hunger Games, where Katniss pulled out a handful of poison berries, threatening suicide along with Peeta, the other tribute from District 12, and forced the Capitol to hold to their original deal of allowing two tributes to win the annual games—a fight to the death. Katniss now finds herself in a difficult situation, forced to choose between the two boys she loves in order to protect her family and friends from the wrath of the Capitol. Katniss plays by the rules, but soon discovers that even this is not good enough to appease the iron fist of the president. When Katniss learns that she will once again be forced to be a participant in the games, she decides it is time to play by her own rules. Catching Fire is an intense novel of courage and strength in the face of impossible odds.

Katniss returns home from hunting when she discovers the president himself has come to see her. The president tells Katniss that her act of defiance during the games has caused rebellions in some of the district. The president says that if Katniss wants her family and friends to survive the next few months, she will have to convince the districts that her act was one of love and not defiance. Katniss agrees, and as she and Peeta, the other winner of her games and her self-confessed lover, go on their Victory Tour, Katniss does all she can to promote the idea that she and Peeta are deeply in love, even allowing herself to become publicly engaged to him.

At the end of the Victory Tour, Katniss comes to the conclusion that she did not do enough to appease the president. Katniss begins to make plans to run away. Katniss begs Gale, her childhood friend and potential lover, into running with her. At first he agrees, but later backs down when he realizes that Katniss wants to bring Peeta along as well. Katniss changes her mind as well when Gale is whipped by the new Head Peacekeeper. Katniss realizes that running away will not change anything. Instead, they must fight, rebelling against the Capital.

For several weeks, Katniss falls into something of a depression as she watches the new Head Peacekeeper turn her district upside down, burning down the Hob and putting many people out of work, enforcing laws the district had forgotten, and abandoning people to starvation. One day, unable to take the emptiness of her days any longer, Katniss sneaks under the fence and escapes into the woods.

Katniss goes to an old lake her father once took her to. However, instead of finding it deserted as she normally would, Katniss runs into two women from District 8. These women tell Katniss they escaped from District 8 shortly after their clothing factory was destroyed out of retaliation for a rebellion plotted and carried out there. These women are on their way to District 13, a district thought to have been destroyed many years before. At first Katniss does not believe this, but as she thinks about it, she begins to think it might have merit. Katniss tries to talk to Haymitch about District 13 and her desire to rebel, but Haymitch forces her to realize that there are not enough people in District 12 to successfully stand up against the Peacekeepers and to take the chance that District 13 still exists.

As Katniss struggles with her desire to force change, she learns that she and Peeta will be forced to fight again in the Games because of a special game held once every twenty-five years called the Quarter Quell. Katniss, Peeta, and twenty-two other victors will have to fight it out in the arena once again. Katniss makes the choice to save Peeta this time, hoping that by ensuring his survival he will be able to rise up and be the voice of a rebellion. However, Katniss does not realizes that others are plotting to be sure she survives because her actions in the previous games have sparked rebellions throughout the world and her face has become the face of that rebellion. Katniss is rescued from the arena. However, Peeta is captured by the Capitol and District 12 is destroyed.