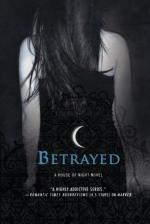 P. C. Cast
This Study Guide consists of approximately 28 pages of chapter summaries, quotes, character analysis, themes, and more - everything you need to sharpen your knowledge of Betrayed.

This detailed literature summary also contains Topics for Discussion on Betrayed: A House of Night Novel by P. C. Cast.

As Zoey prepares for her first ritual as the new leader of the Dark Daughters and Sons, football players from the local high start to go missing. Zoey knows the boys from her previous relationship with Heath. One by one, the kidnapped murders turn up as murder victims. The boys die of numerous lacerations, bite marks, and loss of blood. Zoey believes someone is murdering the boys, but trying to make it look as if they are vampyre attacks.

While Zoey is trying to figure out who is murdering the boys, she also has apprehension about her mentor, who is also the High Priestess or principal of the House of Night, Neferet. While Neferet is supposed to help guide Zoey through the process of turning into a vampyre, it seems as if Neferet is somehow involved in betraying Zoey. As Zoey continues to investigate the kidnappings and murders, she ties Neferet to recent fledglings that have died during the change, but seem to be wandering the courtyard of the House of Night when the rest of the students are asleep.

After Zoey's roommate and best friend, Stevie Rae Johnson, dies of the Change, Zoey sees Stevie Rae in the courtyard. Zoey realizes Neferet has something to do with changing the dead fledglings into evil creatures. The same evil creatures are responsible for the kidnappings and murders of the high school boys. When her ex-boyfriend Heat goes missing, Zoey has a vision, which leads her to Heath and the underground world where the evil creatures are living. Zoey saves Heath's life, but vows to bring down Neferet at the right time for her part in the murders of the boy and what Neferet is doing to create evil creatures.

More summaries and resources for teaching or studying Betrayed: A House of Night Novel.