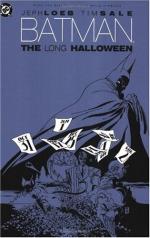 At the beginning of chapter twelve, it is almost Labor Day, and Harvey Dent, who now has his face completely damaged, encounters Solomon Grundy in the sewer. Grundy attacks Dent, until Dent recites the poem that gives Grundy his name. Dent wonders if Grundy died and came back and if such a thing is possible.

Batman first seeks out Falcone at his penthouse in his search for Dent. Falcone tells Batman that he does not know where Dent is...