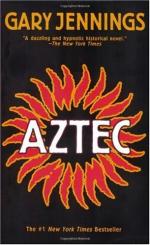 Discuss fate (tonali). Mixtli is an explorer and a merchant, yet he is fatalistic about many things. He believes that the gods give each person his fate. Is this an optimistic view of mankind? Does this view allow for personal growth and change?

Discuss legend. There is a legend that the god Quetzalcoatl and the Tolteca will return from the Eastern Ocean. What effect does this have on the ability of Motecuzoma to defend the Mexica Empire?

Discuss the "Flowery Death." At the end of the book, the Bishop states that Mixtli is...