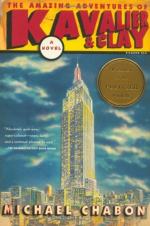 Superman Chronicles, Volume 1 (2006) is a collection by the original Superman creators, Jerry Siegel and Joe Shuster. In this graphic novel, they reprint all of Superman's early appearances, beginning in 1938.

The Final Solution: A Story of Detection is Michael Chabon's 2004 novel about an aged Sherlock Holmes engaged in solving one last mystery.

Houdini!!! The Career of Ehrich Weiss (1996), by Kenneth Silverman, is an acclaimed biography of the world's most famous escape artist. It contains more than a hundred photos, many of them rare and previously unseen.

Maus: A Survivor's Tale (Volume I, 1986; Volume II, 1991), by Art Spiegelman, is a graphic novel memoir with comic-like drawings about Spiegelman's father and how he survived World...