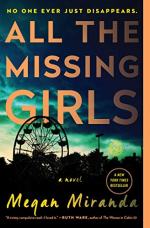 Megan Miranda
This Study Guide consists of approximately 55 pages of chapter summaries, quotes, character analysis, themes, and more - everything you need to sharpen your knowledge of All the Missing Girls.

All the Missing Girls Summary & Study Guide includes comprehensive information and analysis to help you understand the book. This study guide contains the following sections:

This detailed literature summary also contains Quotes and a Free Quiz on All the Missing Girls by Megan Miranda.

The following version of this book was used to create this study guide: Miranda, Megan. All the Missing Girls. Simon & Schuster, 2016. Kindle Edition.

Nicolette Farrell is a self-made woman in the eyes of her successful lawyer fiancé, Everett, who comes from a high society family. She leaves him and the life she has created for herself to return to her hometown, Cooley Ridge, for two months under the guise of helping her brother manage the finances of their ailing father. She is going because her father has sent her a letter saying that he needs to talk to her because he remembers that girl. Nicolette assumes that he is referencing her best friend Corinne Prescott who disappeared ten years ago. When she arrives at the family home, she notes that the pictures that were on her bedroom wall are gone. Corinne had been in them all. Her ex-boyfriend from high school also drops by and tells her that he has a date with the same girl who had provided the group’s alibi on the night Corinne disappeared. Then the girl, Annalesie, disappears. Just as Corinne’s boyfriend, Jackson, had been the main suspect when she disappeared, the police start building a case against Tyler saying that he killed Annaleise because he wanted to break up with her due to Nicolette’s return. As it turns out, Nicolette has slept with Tyler even though she is engaged to Everett and her involvement with Annaleise goes deeper than the police know.

On the night of her disappearance, Tyler called Annaleise and she met with him, Nicolette and Daniel. They confront her because she has been blackmailing Patrick and has now extended her blackmail reach to Nicolette as she thinks Nicolette has money because of Everett. She has deducted that someone in the Farrell family killed Corinne because, on the night of Corinne’s disappearance, she had innocently taken pictures of Nicolette’s house and in looking at them recently realized that there was a body on the porch. She is right to think that it is Corinne’s as Nicolette “accidentally” hit Corrine and her father tried to make up for being a bad father by burying Corrine’s body under the garage. This is what her father is remembering and what Nicolette has to keep him from telling the police. Annaleise has already taken Nicolette’s engagement ring and will not return it. She runs away from the Nicolette and the men, and calls Laura, Daniel’s wife to implicate the family in Corinne’s death. Laura, who is pregnant, meets her and, in an attempt to save the life she has before her, kills Annaleise just as Nicolette had killed Corinne because she had pushed her too far.

Nicolette correctly deduces that Laura killed Annaleise and warns Daniel to get rid of the gun she used. Daniel has figured out that Corinne’s body was buried under the garage and gets rid of it. When he and Tyler find it, Nicolette acts as if she does not know what is going on and accuses Tyler of lying to her as he has always told her that she did not do anything wrong that night. However, Nicolette says things in the narrative such as she can always get Tyler to do what she wants, she always took the dare, and that she bet Corinne was surprised to find out that fact. This hints that she hit Corinne on purpose.

While all of this is going on, instead of trying to convince her father not to sell the house as Daniel wants her to do, she tries to keep him from talking to the police. She calls Everett for advice and, out of concern and wanting to help his future in-laws, Everett comes to Cooley Ridge. It is not long before Nicolette starts to lie to him – telling him that she lost the engagement ring and that she does not know what happened to Corinne. As he presses her, he begins to suspect that Nicolette is not the girl he thought she was and that she is hiding something. Nicolette realizes that time is running out for her and that she is going to have to pay for what she did to Corinne. This means staying in Cooley Ridge and keeping those who know about her crime close to her. She breaks up with Everett, gives Tyler an alibi, discovers she is pregnant with his baby, and brings her father to live with them in the house and thus finds herself stuck, doing time in the place she tried so hard to escape.

More summaries and resources for teaching or studying All the Missing Girls.

All the Missing Girls from BookRags. (c)2022 BookRags, Inc. All rights reserved.