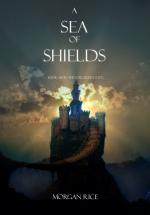 A Sea of Shields Quotes

Morgan Rice
This Study Guide consists of approximately 45 pages of chapter summaries, quotes, character analysis, themes, and more - everything you need to sharpen your knowledge of A Sea of Shields.

Reece knew it was the wise thing to do. The right thing to do.
-- Reece (Chapter 3 paragraph 4)

Importance: Reece is referring to his upcoming marriage to Selese. He promised Stara he would call off the wedding but he is having second thoughts now that he is back home. His mother solidifies those thoughts and makes him see that the emotions he holds for Stara are fleeting, while his marriage to Selese could be enduring.

Those McClouds, Godfrey realized, were rougher around the edges than the MacGils. The MacGils were tough, but the McClouds - there was sometime to them, sometimes a bit uncivilized.
-- Godfrey (Chapter 5 paragraph 11)

Importance: This is one of the first indications that the people of the Upper Islands are just different from the people of King's Court. Godfrey is drunk in this scene but he realizes that there is a hard edge to the men that won't respond to Gwen's typical leadership style.

More summaries and resources for teaching or studying A Sea of Shields.

A Sea of Shields from BookRags. (c)2020 BookRags, Inc. All rights reserved.