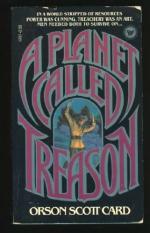 Orson Scott Card
This Study Guide consists of approximately 39 pages of chapter summaries, quotes, character analysis, themes, and more - everything you need to sharpen your knowledge of A Planet Called Treason.

This detailed literature summary also contains Topics for Discussion and a Free Quiz on A Planet Called Treason by Orson Scott Card.

A Planet Called Treason is a classic science fiction novel by Orson Scott Card. It contains many of the elements that Card is famous for in his science fiction writing, including a spectacularly gifted, youthful protagonist on a quest to solve a big problem. This a story of a heroic journey, which Lanik Mueller, the youthful protagonist, undertakes when he discovers that he is a "radical regenerative." The planet on which this story takes place is called Treason after the accused crimes of several brilliant scientists, researchers and other people who were banished to the planet. Each family has taken a portion of the planet for itself and has developed, on its own, particular genius or gifts related to the original scientist's or other person's original focus or job. Lanik Mueller's ancestor is a geneticist, so his family develops advanced genetics, including the ability to regenerate just about every part of the body short of cutting off the head. Not surprisingly, the Muellers become a warring family as they can never lose battles. However, some of the genetically altered people become radical regeneratives, which means that they spontaneously grow all sorts of appendages and unexpected growths. The Muellers choose to pen these radical regeneratives and harvest the many growths to trade for an important commodity, iron. Usually only the wealthy can be genetically altered to have the protection of regeneration, while the poorer people who are chosen to be radical regeneratives are not treated even as human beings.

The subversives have been placed on this planet, called Treason, by a mother planet, presumably Earth, though never named. The mother planet has the technology for space travel, but they place the banished on Treason which has no iron and no way to get it except through a space-travel device called The Ambassador, which takes items for trade and returns small amounts of iron. If the families can get enough iron, they can build spaceships, escape the planet and go back to the mother planet. However, it has been so many generations since their arrival that none of them has even been on the mother planet, and no one remembers it. They all just want iron so they can escape Treason. The families all live in very separate areas. So, each of them has developed a specialty, such as the Muellers' genetic specialty. They independently trade their items via the Ambassador for iron.

Lanik is due to inherit the throne of his father in the land of Mueller, their family name. When Lanik grows a pair of beautiful breasts on his otherwise tanned and muscled young body, he realizes that he is cursed with being a radical regenerative. The family cannot pen him like an animal with the other radical regeneratives who are harvested, so Lanik knows he must leave the family lands and travel abroad, hopefully to find some help but also to help solve the problem of not having enough iron. Since Lanik cannot rule Mueller, his brother, Dinte, is now in line to take the throne, although most people find Dinte weak and objectionable.

The novel is the story of how Lanik travels throughout the planet Treason, meeting the various peoples with their particular gifts. He learns the various talents of the families across the planet. Some are loving and benign, some are interesting but harmless, and some are very dangerous indeed. In fact, there is one family, the Andersons, that has enslaved the whole planet, all the families, which have been heretofore unaware of their dilemma because of the devious gift of the Andersons. Lanik learns enough of the various strategies of the other families, as interesting and science fictional as they can be, and uses them to defeat the Andersons. However, in the process he pays a terrible price, which he suffers from for the rest of his long life.

In the front of the book is a map of the lands of Treason, named by the last names of the original banished, so the reader can find out where locations are as Lanik travels along.

More summaries and resources for teaching or studying A Planet Called Treason.