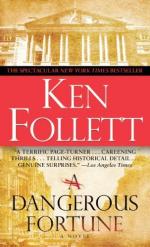 This detailed literature summary also contains Topics for Discussion and a Free Quiz on A Dangerous Fortune by Ken Follett.

The story begins with a bunch of schoolboys disobeying the rules and going for a swim at the quarry pool. While they are teasing and bullying each other, one of them, Peter Middleton, drowns. The official story told at the inquest differs from the true events, and the cover-up and treachery begin that is to continue for three decades as their schooldays follows the characters through their lives.

The murder of Peter Middleton sets the stage for the treachery and deceit of the next three decades in this suspense novel. As the characters mature and progress through their careers and marriages, the events surrounding the murder are what they always come back to. Some are trying to cover up for their part in the murder while others spend years trying to find out the true facts of the murder.

All of the murders are related to Micky Miranda who does not want to return to his native land of Cordova in South America. He wrangles his way into the elite of English society while he is helping his father in his plan to overthrow the existing government in Cordova and install himself and later his son, as President. Micky does whatever he has to do to achieve his goals, even if it means killing. He kills anyone who stands in his way of pleasing his father and obtaining loans for Cordova.

The fortunes of a major London bank are tied to the whims of a manipulative and ambitious wife of one of the partners. The murder at Windfield causes a bonding between Edward, Micky and Augusta as they spend decades perpetuating one deceit after another to cover up the original murder and to achieve their goals. Augusta and Micky are two characters that see nothing wrong with ruining or killing people.

In telling the story of this novel, Follett moves the reader through the gamut of English society showing the contrast in the lifestyles of the rich and poor. The reader moves from the poor in the slums and brothels to the elite hobnobbing with the Prince of Wales. Some of the characters are greedy while others are not. Some like Rachel and Maisie work to improve the lives of others. Some characters like Augusta and Nora, just want social standing and wealth.

A Dangerous Fortune is recommended reading for anyone who likes a good suspense novel. Follett's skills in writing make the book easy to reader and so full of intrigue that the reader has a hard time putting the book down. Like many of Follett's novels, this one has a surprise ending.