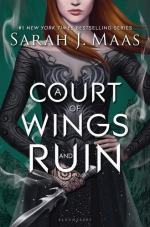 A Court of Wings and Ruin (A Court of Thorns and Roses) Summary & Study Guide includes comprehensive information and analysis to help you understand the book. This study guide contains the following sections:

This detailed literature summary also contains Quotes and a Free Quiz on A Court of Wings and Ruin (A Court of Thorns and Roses) by Sarah J. Maas.

A Court of Wings and Ruin is the third installment of a series, A Court of Thorns and Roses, by Sarah J. Maas. In the first two installments of the series, Fayre Archeron was a human girl when she arrived in the land of faeries. She was Made into a faerie herself after defeating the evil Amarantha. She believed she was in love with Tamlin, High Lord of the Spring Court. However, she broke off that relationship when he locked her in the house. Tamlin said he locked Fayre up to keep her safe, However, Fayre had been trapped before; and,her panic over being locked in the house brought Rhysand, High Lord of the Night Court, to her rescue.

Fayre discovered that she and Rhysand shared a mating bond. Previously, Rhysand had been willing to ignore that bond if it meant Fayre would have a happy life with Tamlin. After both accept the bond and are mated, Rhysand takes the commitment a step farther, having Fayre take the vows to become High Lady of the Night Court. No other male had ever named a female to that position. As the previous novel of the series, A Court of Mist and Fury, comes to an end, Fayre sees that Tamlin's betrayal lead to both of her sisters, Nesta and Elain, being forced into a magical Cauldron where they become faeries.

A Court of Wings and Ruin opens with Fayre living in the Spring Court where she is pretending that she is still in love with Tamlin and that the bond with Rhysand has been broken. She begins to sow the seeds of discord among Tamlin's people, seeking revenge for his betrayal. When she has completed that task, she breaks away from the Spring Court to go home. She stops briefly to help her friend, Lucien. Lucien shares a mating bond with Fayre's sister, Elain, though Elain was engaged to a mortal before she became fae. Lucien is anxious to be near Elain. Thus, Elain leaves the Spring Court with him, though she is uncertain that he is trustworthy.

Fayre and Lucien encounter dangers on the way, but eventually make it back to the Night Court where Fayre settles in to help with plans for the upcoming battle. They know their opponent, the King of Hybern, has a huge army. Additionally, he has the magic Cauldron, which wields incredible power. Fayre, Rhysand, and their allies seek ways to increase their odds and meet Hybern in two brutal battles only to discover that he is merely tiring them out so his main force can finish them off. Over the days leading up to that final battle, Fayre's sister Nesta learns more about the powers she gained when she was changed in the Cauldron. Elain discovers that she has the gift of foresight. Both become vital in the fight against Hybern. Jurian, a human resurrected by the King of Hybern, turns out to be Fayre's ally who had been using his position in the Hybern court to gather information. Tamlin seems to be supporting the King of Hybern, but he is also working against the King from within.

When the final battle arrives, Hybern's forces are obviously going to overrun the faeries, even with the support of three magical creatures. Fayre and Amren, a member of the Night Court who is from another world, believe they can turn the tide if they eliminate Hybern's access to the Cauldron. Unexpected support arrives in the form of a deposed queen who is now a firebird, a human armada led by Fayre's father, and the fighting force of Miryam. Miryam, a woman who (like Fayre), had been changed into an immortal being. Fayre does manage to reach the Cauldron, and Amren charges, finishing off the Hybern forces and bringing the battle to an end. Fayre faces one more challenge as she seeks to forge the pieces of the Cauldron back together to keep it from completely destroying the world. Rhysand feeds her power for this task but dies in the process. Fayre calls for the support of the other High Lords, who help bring him back to life.

As the characters deal with their wounded and dead, including Fayre's father and the King of Hybern, Fayre calls a meeting of those in a position to make decisions, both for the faerie realm and for the human world. Though they come to no immediate conclusions, they do begin to forge relationships that will serve them in this new world, a world Fayre hopes will allow humans and fae to live in harmony to the benefit of all.

A Court of Wings and Ruin (A Court of Thorns and Roses) from BookRags. (c)2022 BookRags, Inc. All rights reserved.