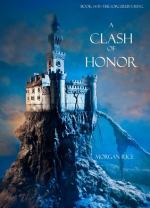 Morgan Rice
This Study Guide consists of approximately 35 pages of chapter summaries, quotes, character analysis, themes, and more - everything you need to sharpen your knowledge of A Clash of Honor.

Thor asks Reece if he would support his proposal to Gwen. Reece completely agrees while Kolk praises Thor, which surprises Thor because he'd never accepted Thor into the Silver before the battle that Thor won. Thor is promoted to captain, but Thor's brothers, Drake, Dross, and Durs appear, announcing that Thor is weak and does not deserve the honor. They refuse to take orders from him. Reece shows Thor that Gwen is waiting for him across the hall.

Gwen leads Thor from the feast into a giant meadow, then on to a giant structure she says is her mother's house. They enter, and Thor tries to ask her to marry him, but she stops him. Later, Gwen swims in the Lake of Sorrows. She realizes that she is pregnant. Argon's voice tells her that the child is a great being. She...

More summaries and resources for teaching or studying A Clash of Honor.

A Clash of Honor from BookRags. (c)2023 BookRags, Inc. All rights reserved.