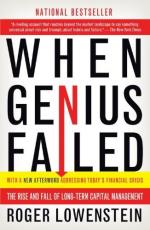 2. Once the financial market in Russia collapsed, what did people stop trading?
(a) Stocks.
(b) Bonds.
(c) Corn.
(d) Commodities.

3. What did Long-Term avoid by working with derivatives instead of stocks?
(a) Outside interest.
(b) Disclosure.
(c) Fees.
(d) Profit.

4. In 1997, who awarded Long-Term the loan warrant it had requested?
(a) Union Bank of Switzerland.
(b) Chase.
(c) Bank of America.
(d) The Cayman Islands Commons.

5. Why was Long-Term unable to get out of the situation with Russia?
(a) Their investments were not liquid.
(b) Russia would not let them.
(c) They did not want to.
(d) They had too much money.

1. What did Long-Term risk losing if they allowed their assets to fall below five hundred million dollars?

2. When did the Russian market begin to fail?

3. What did Long-Term think about the financial crisis that hit in August of 1998?

4. What resource close to Long-Term began to experience financial difficulties following the financial problems in Russia?

5. What put pressure on the currency in Brazil?

1. What strategy led to Long-Term's downfall during the Russian financial crisis?

2. When did huge losses begin for Long-Term and why?

3. Why were regulators concerned about the volume of banks and investment banks involved in the derivatives market?

4. What was the Fed's response to Long-Term's exposure?

5. In terms of the spreads in 1998, what was the difference between what Long-Term expected them to do and what they actually did?

6. What contributes to the estimation of market volatility?

7. In 1997, what was Meriwether encouraging his employees to do?

8. What did the Fed determine would happen if Long-Term failed?

9. Following the financial crisis in Russia, what did the partners do to begin raising money?

10. Why did the issue in Russia cost Long-Term money on an initial basis?