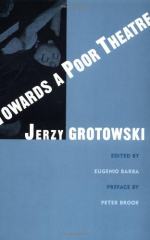 Objects & Places from Towards a Poor Theatre

Jerzy Grotowski
This set of Lesson Plans consists of approximately 135 pages of tests, essay questions, lessons, and other teaching materials.

This is Jerzy Grotowski's school of theatre, which aims for a poor theatre to differentiate itself from film and television.

Ideally, the performer in Grotowski's theory is able to enter this state, where inner impulse and outer reaction are identical and unmediated.

This is one of the plays put on by Grotowski's theatre company. It radically reconfigures Wyspianski's original play into a pessimistic look at inmates in an extermination camp circa World War II.

This is the method of Grotowski's teaching, which involves the taking away of unwanted restraints in the actor.

This is a series of beats, a set of actions and reactions, which define the actor's performance.

This is generally the sum of the actor's experiences in life, his biological traits/tendencies, his goals and desires, etc.

More summaries and resources for teaching or studying Towards a Poor Theatre.

Towards a Poor Theatre from BookRags. (c)2021 BookRags, Inc. All rights reserved.