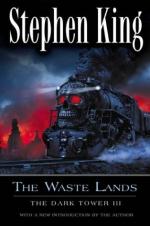 Stephen King
This set of Lesson Plans consists of approximately 141 pages of tests, essay questions, lessons, and other teaching materials.

4. What sound draws Susannah and Roland away from shooting practice in Chapter 1?
(a) Answering gunshots.
(b) The approach of a stranger.
(c) A bomb going off in the distance.
(d) Crashing trees.

1. Whose voice does Eddie hear in his head as he carves in Chapter 3?

2. What does Eddie often see in a piece of wood?

3. Which guardian does Roland talk about in a poem taught him by his nursemaid?

4. Why does Eddie decide he could never be better at anything than Henry in Chapter 3?

5. What is the voice Eddie hears in his head as he carves saying to him?

More summaries and resources for teaching or studying The Waste Lands.