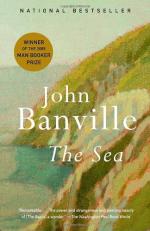 Get The Sea from Amazon.com
View the Study Pack
Lesson Plans
Order our The Sea Lesson Plans

John Banville
This set of Lesson Plans consists of approximately 121 pages of tests, essay questions, lessons, and other teaching materials.

The narrator says that the gods left when the tide was high, leaving the beach covered with water, the birds upset, and the narrator unable to swim. He also says it wrecked a ship which was like a grave.

2. What did the narrator see the first time he saw the Grace family?

The first time the narrator saw the Grace family, the father was drinking and winking while the daughter ran around inside the house playing. He was mesmerized with them immediately.

3. What is the narrator's life like at The Cedars?

The narrator lives at a boarding house called The Cedars. He has a great bedroom that was once the master bedroom, but he still lives in close proximity to others. Because of this, the narrator guesses about the other residents ailments and personal lives.

The Sea from BookRags. (c)2021 BookRags, Inc. All rights reserved.