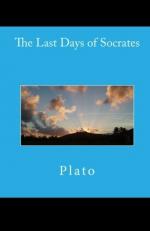 The Last Days of Socrates Quiz | Eight Week Quiz A

Plato
This set of Lesson Plans consists of approximately 138 pages of tests, essay questions, lessons, and other teaching materials.

This quiz consists of 5 multiple choice and 5 short answer questions through Book 1, The Last Days of Socrates: Chapter 1, Introductory Notes.

1. Socrates demonstrated his loyalty to his city in what capacity?
(a) Senator.
(b) Headmaster.
(c) Soldier.
(d) Mayor.

2. The people of his city felt that, for Socrates to have survived this battle, it must have taken a great deal of what?
(a) Luck.
(b) Wisdom.
(c) Diplomacy.
(d) Courage.

3. Who originally arranged these four dialogues in a group?
(a) Socrates.
(b) Tarrant.
(c) Plato.
(d) Thrasyllus.

4. Why are the Socratic dialogues still studied, according to Tarrant?
(a) Because scholars still don't completely understand them.
(b) They are challenging for students to comprehend.
(c) The information contained in the dialogues is still relevant.
(d) They must be mastered before other important material from the same time period can be studied.

2. Approximately how many years ago did the Socratic dialogues take place?

3. According to Tarrant, this version of the Socratic dialogues is unique in what way?

4. According to Tarrant, what is the quality and accuracy of the dialogues originally recorded by Plato?

More summaries and resources for teaching or studying The Last Days of Socrates.

The Last Days of Socrates from BookRags. (c)2020 BookRags, Inc. All rights reserved.