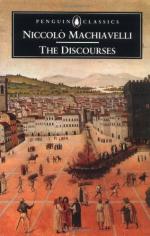 Objects & Places from The Discourses

This is the country where Machiavelli's lived and where he thinks been undermined by decadence. One purpose of "The Discourses" is to help revive virtuous government in the city states here.

This is the city where the heart of an ancient republic is found. It is a source of examples for managing city-states of Machiavelli's day.

These are City-states that were the dominant form of political organization in Machiavelli's time.

The Best Form of Government

One purpose of "The Discourses" is to defend a republican form of government as the best because it combines the features of the three forms of government.

Causes of Cultural and Political Decay

Among these phenomena are wars, natural disasters, famine and conspiracies.

Freedom in a Republic

This is one of the most valuable features of republican life.

How and when to conduct these is a major theme of...