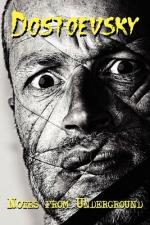 Fyodor Dostoevsky
This set of Lesson Plans consists of approximately 118 pages of tests, essay questions, lessons, and other teaching materials.

1. How does the writer describe his personality in his previous profession?
(a) Aloof.
(b) Nice.
(c) Mean.
(d) Indifferent.

2. The writer states that man could not act against his own personal advantage. What, therefore, must his actions be?
(a) Selfish.
(b) Good.
(c) Vile.
(d) Spontaneous.

4. While the writer admits that spite may not provide a valid reason for revenge, why does he then say this might occur?
(a) Because spite is a chemical decomposition.
(b) He is tired of acting out of spite.
(c) He cannot blame anyone.
(d) The laws of nature rule out spite as a primary cause.

5. What would happen to a man who tries to assert himself?
(a) He would die.
(b) He would succeed.
(c) He would understand reason.
(d) He would go mad.

6. What fundamental law does the writer say governs this dilemma of change?
(a) The law of gravity.
(b) The law of change.
(c) The law of heightened consciousness.
(d) The laws of nature.

8. How does the writer describe the current state of the world?
(a) A time of forgiveness.
(b) A negative time.
(c) A time of vengeance.
(d) A positive time.

10. During Part 1, Chapter 6, the writer discusses what he would have done if he had a career. What is it that the writer would have liked to do?
(a) Be a drunkard.
(b) Live honorably.
(c) Make everything beautiful.
(d) Rid the world of distastful things.

12. The writer discusses a pleasure that comes from his illness. From where does the pleasure stem?
(a) Humiliation.
(b) Pride.
(c) Joy.
(d) Shame.

15. What does the writer say about the laws of mathematics and nature?
(a) They are useful only to the educated.
(b) They are overcomplicated.
(c) They are undeniable.
(d) They are a burden to a "man of action".

1. How does the writer describe St. Petersburg?

2. What does the writer say a man can do with no primary cause for action?

3. What does a sense of revenge do to a man?

5. Although the writer states that he eventually begins to believe certain things about his illness, how does he feel about it in the beginning?

Notes from the Underground from BookRags. (c)2022 BookRags, Inc. All rights reserved.