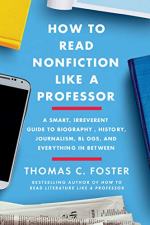 Related Topics
How to Read Literature Like a Professor

How to Read Nonfiction Like a Professor Fun Activities

In Chapter 2, "The Ecology of the Nonfiction Biosphere," Foster claims that we still rely on newspapers to tell us quickly and first about breaking news. Choose a news story of some national importance and track the first mention of it in the online version of your local newspaper, in the online version of a national newspaper, on Twitter, on Facebook, and on the national television news. After you find the first mention of the story in each source, create an annotated timeline that shows when each source reported the news and briefly summarizes how much information each source made available during that first mention.

Foster focuses the vast majority of his text on media forms that dominated the twentieth century. Thinking about both what you have learned from reading his book and what you know from your own use of...

More summaries and resources for teaching or studying How to Read Nonfiction Like a Professor.

How to Read Nonfiction Like a Professor from BookRags. (c)2021 BookRags, Inc. All rights reserved.