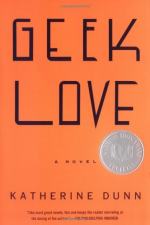 1. When Oly arrives home after visiting Miranda's work, what is she worried about that prevents her from falling asleep?
(a) The nightmares that plague her.
(b) The police coming to arrest her.
(c) Her own pride.
(d) Miranda's safety traveling home from work.

3. Where is Chick kept when he cannot be watched by his family?
(a) In Arty's tank.
(b) In the giant cat cage.
(c) In his parent's bedroom.
(d) Strapped to Oly's back.

5. How does Crystal Lil watch television?
(a) She does not believe in watching television.
(b) With a giant magnifying glass.
(c) In a recliner, under her lucky afghan.
(d) Through the window, into the neighbor's apartment.

1. When Chick's power is realized, whose reaction does Oly worry about?

2. Why doesn't Oly tell her mother who she is?

3. How does the family measure the value of the children?

4. Miranda reveals that she has recently been approached by a woman named Miss Lick with an interesting offer to make money. What does Miranda have to do in this deal?

5. How old is Chick when he begins working for the circus?