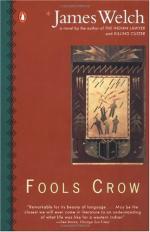 1. What happens to the designs painted on the skin by the woman that Fools Crow now realizes is the legendary So-at sa-ki, Feather Woman, after she leaves the scroll by Fools Crow?

2. Where does Yellow Kidney take shelter after leaving the camp?

3. What is the white scab disease?

4. In Chapter 31, what does Fools Crow see the older woman in the doe skin doing?

5. Which of the Napikwan demands do the Pikuni promise to cooperate with?

1. When the Pikunis chiefs meet for council, what do they decide to do about the white healer's warning and the seizers' demands?

2. Even though the Lone Eaters trust this white healer, why don't they agree to follow his advice?

3. How does Fools Crow help Red Paint's youngest brother conquer his fears and nightmares about the rabid wolf who bit him?

4. Describe what Fools Crow sees or does not see in the water of the place he is lead to in his dream.

5. What does Fast Horse suggest Fools Crow tell his father when he returns to the Lone Eater Camp?

6. What happens when Fools Crow catches up to Fast Horse and tries to talk to him about his association with Owl Child and his killing of the rancher?

7. How does Fools Crow discover the new land in his dream during his seven-day journey?

8. How is Yellow Kidney's body delivered back to his people?

9. What does Fast Horse find in the war lodge while Owl Child stays with the horses, and how does he know who it is?

10. Why doesn't Fast Horse return to the Lone Eaters himself?

Point of view can change whole story. Most of the conflict with the Napikwan in this novel were from the perspective of the Pikunis. Certainly, the demands of the seizers, which were ultimately rejected by the Piknunis, were seen through the eyes of the Pikunis.

Revisit the meeting from which we received the three main seizer demands: General Sully, who was trying to negotiate an agreement that would guarantee the safety of his people. Write a scene within the fort with General Sully and his advisors as they discussed the problems and dangers they were experiencing with the Blackfoot and developing their list of demands.

White Man's Dog and Fast Horse are the two main characters of this book.

2) What were the major turning points that propelled White Man's Dog to be the man of honor and tradition, while Fast Horse abandoned the ways of his people and chose another path?

3) Compare and contrast Fools Crow and Fast Horse toward the end of the story. Is there hope for Fast Horse to become an honorable man?