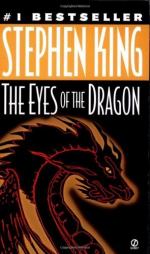 The Eyes of the Dragon Character Descriptions

This eldest son is favored by the king and convicted of murder.

This short, round character loves to hunt. He witnesses a murder, but doesn't tell anyone and is plagued by sleeplessness.

This son of a nobleman is forced to flee his country but later returns to help his best friend.

This character helps locate the people planning a rebellion and falls in love with one of the other characters.

This butler is the son of a butler and helps reveal the person who poisoned the king.

This character is one of the exiles plotting a rebellion and the one who convicted another character of murder.

This character tracks one of the other characters and finds a secret entrance to the castle.

This slow-witted character enjoys hunting and depends on others when it is necessary to make a...

The Eyes of the Dragon from BookRags. (c)2021 BookRags, Inc. All rights reserved.