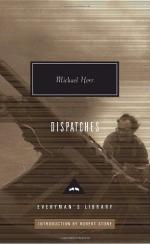 Michael Herr - He writes his dispatches from Vietnam for Esquire magazine.

Grunts - Enlisted Marines who fight the major battles of the Vietnam War.

Cav - The nickname for the air cavalry, those units that fly helicopters.

NVA and VC - These are the two armies of the Vietnamese.

Colleagues - These are correspondents who receive special attention in the book.

Helicopter Pilots and Gunners - These men transport correspondents throughout Vietnam.

Marine Officers - These upper status men often talk about the war from a broad viewpoint.

Sean Flynn - He carries his father's good looks and fame and his colleagues admire his journalistic flair.

Page - A citizen of the United Kingdom, he uses his pluck and courage to stand out among correspondents.