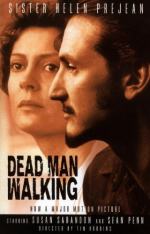 Helen Prejean
This set of Lesson Plans consists of approximately 104 pages of tests, essay questions, lessons, and other teaching materials.

After his father and mother separated, Patrick and his younger brother and sister had a hard time. Patrick and his brother used to support the family by hunting rabbits. At the age of twelve he was imprisoned for robbing a car, but was bailed out by his uncle.

2. Why does meeting Patrick make Helen realize how lucky she has been?

Helen compares her upbringing to Patrick's. She realizes how lucky she has been to have grown up among a supportive and financially secure family, wondering what cracks in her personality would have appeared if she had experienced Patrick's life.

Patrick is jail for shooting a teenage couple called David and Loretta. The story goes that he was out hunting rabbits with his brother Eddie when they caught the couple trespassing. They forced both of the them on their faces and then Patrick shot the teenagers with a .22 caliber rifle.

More summaries and resources for teaching or studying Dead Man Walking: An Eyewitness Account of the Death Penalty in the United States.

Dead Man Walking: An Eyewitness Account of the Death Penalty in the United States from BookRags. (c)2021 BookRags, Inc. All rights reserved.