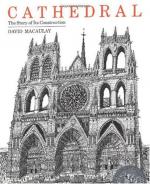 Cathedral: The Story of Its Construction Multiple Choice Test Questions

David Macaulay
This set of Lesson Plans consists of approximately 103 pages of tests, essay questions, lessons, and other teaching materials.

2. Who controls funds in the church in Chutreaux?
(a) The King of France.
(b) A group of clergymen known as the chapter.
(c) A group of master craftsmen.
(d) The people of Chutreaux.

7. What does each master craftsman then establish?
(a) A reputation.
(b) A workshop for their respective trade.
(c) A place to live during the building of the cathedral.
(d) A workshop for all the trades involved.

Cathedral: The Story of Its Construction from BookRags. (c)2022 BookRags, Inc. All rights reserved.